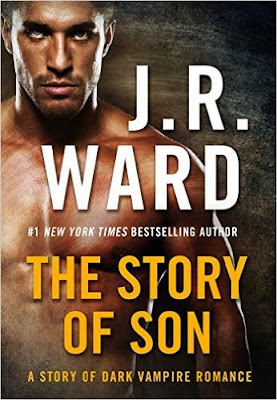 First released in the anthology Dead After Dark, dive into this hot novella from #1 New York Times bestselling author J.R. Ward. Available for the first time ever as a standalone ebook, get lost in the sinful pleasures of a vampire so obsessed with one woman, he will relinquish her blood, if only he can have her heart . . .

Held captive by a dark, seductive vampire with an unworldly hunger, the beautiful Claire Stroughton fears her life as a lawyer has irrevocably taken a turn for the worse. But when this deeply sensual-and highly dangerous-vampire convinces Claire that his desire for her is stronger than his lust for blood, she is compelled to give everything up to him, body and soul . . .

Review:
I've seen mixed opinions on whether The Story of Son fits into J.R. Ward's Black Dagger Brotherhood series or not, some people say it's set in the same world but about stand alone characters while other's say it's in an entirely separate world. I can't confirm for sure either way but to me it feels like a story written by the author before she had finished fully developing the BDB world. In a lot of ways it has a very similar feel to that series (although these aren't characters you'll have met before and I didn't spot any cameos from familiar faces) but it doesn't quite follow the BDB rules, it's almost as if this was a trial run and she used the story to help her figure out the vampire mythology that a lot of fans are now familiar with thanks to the BDB series. That isn't a negative, I just thought it might help to clarify things for readers who (like I was!) are confused about where this story fits into the series.

It's also worth noting that this story was previously included in the Dead After Dark anthology before being released as a stand alone eBook. Again not a complaint but just something you might want to be aware of so you don't end up buying something you've already read.

So, now we've got that out of the way let's talk about the actual novella! The Story of Son is fairly short so you're going to have to just go with the almost instant connection between the main characters but I don't think you'll find that too hard because it's written to J.R. Ward's usual high standards and both Son and Claire are extremely likeable characters. I don't want to say too much about the plot because it would be very easy to give spoilers but when lawyer Claire is asked to visit an important client about a last minute change to her will she ends up getting a lot more than she bargained for.

Son, who Claire thankfully renames Michael, has had a pretty horrible time of things and I felt terrible for the way he had been treated by the people who should have cared for him. Claire is the first person to see underneath the monster he's been told he is to the sweet, caring guy that he actually is and it's her love that helps to save him. I really liked both of these characters and I enjoyed their story even though I would have loved to see this turned into a full length novel. I'd quite like to see more of Michael and Claire but I'm not really sure how that could work, I can't see them being able to appear in the BDB books because of certain inconsistencies in the world building but I can't imagine J.R. Ward creating a whole new series around them when it would be so similar to the books she already writes. It's a shame really because they could have been a great couple to spend more time with.

I'd kind of lost my love of the BDB series a little over the last few years and have fallen behind by not reading the last few releases but this reminded me why I always loved J.R. Ward's writing so much. It's made me realise how much I've missed the BDB world so if nothing else I'm glad it's rekindled my excitement and I'm now looking forward to continuing with the main series.