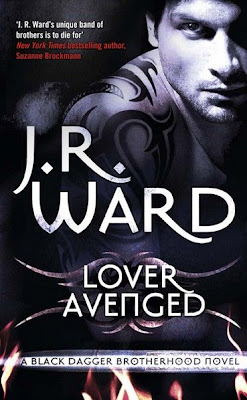 As the vampire warriors of the Black Dagger Brotherhood defend their race from their slayers, one male's loyalty to the Brotherhood is about to be tested - and his dangerous mixed blood revealed.

Caldwell, New York, has long been the battleground for the vampires and their enemies, the Lessening Society. It's also where Rehvenge has staked out his turf as a drug lord and owner of a notorious nightclub that caters to the rich and heavily armed. His shadowy reputation is exactly why he's approached to kill Wrath, the Blind King, and leader of the Brotherhood.

However, Rehvenge has always kept his distance from the Brotherhood. He's a sympath and the revelation of his deadly secret will result in his banishment to a colony for sociopaths. And as plots within and outside the Brotherhood take their toll against Rehvenge, he turns to the only source of light in a darkening world: Ehlena, a vampire untouched by the corruption that has it's hold on him - and the only thing standing between him and eternal destruction.

Review:
After the disappointment of Lover Enshrined I have put off reading Lover Avenged for a long time. I don't think it helped that Rehvenge is a character I've never been particularly keen on throughout the rest of the series. As a half vampire and half sympath Rehvenge is a sociopath, he is also a crime lord, murderer, pimp and a drug dealer - as much as I like a bad boy I do have my limits! We have seen a nicer side to Rehvenge in the way he cares for his mother and his sister Bella but I wasn't convinced that he was hero material. Still if anyone could convince me otherwise it would have been J.R. Ward so I finally decided it was time to give Lover Avenged a try.

I have to admit I ended up liking Rehv more than I expected to but considering this was his story I still don't feel like I actually know him that well. In the earlier BDB books the main focus was the romance, yes there was an ongoing background story with the war between the brotherhood and the lessers and we always got to spend time with the other brothers to build the excitement for when it was their turn, but the majority of the books were spent getting to know the two main characters. That always let us really get to know our heroes and heroines and meant that the romance was so much more believable, I felt invested in the outcome of their relationships and enjoyed spending time with them. For me the parts of the story that I liked less was where you are seeing things from the lesser's point of view so I'm disappointed that the series seems to be changing the focus away from the romance and onto everything else. Lover Avenged spends so much time on other story lines that I didn't really care about Ehlena and Rehv. I'd read nearly 300 pages and realised that we'd only seen them together once and they'd had a total of two phone conversations. I actually liked them when they were together but there was nowhere near enough considering it was their story.

We spent far more time with Wrath and Beth, John Matthew and Xhex and even with Torhment than we did with Ehlena and Rehv. I enjoyed catching up with Wrath (my heart broke for him and some of the latest developments!) although I was disappointed with the way he had pulled away from Beth but luckily she was able to kick some sense into him. It was also great to see Torhment start to pull himself together after his devastating loss. We spent so much time with JM and Xhex that it makes me nervous that they might not even make an appearance in their own book judging by the way the series is going! There was also far too much time spent with Lash for my liking.

So, although I liked Rehv more than I expected to and the chemistry between him and Ehlena is undeniably hot I still felt like their relationship was missing something. I also felt that Rehv's sympath side wasn't explored as much as it could have been, I wanted to know more about his heritage and the sympath side of his family. I felt that the resolution with his blackmailer was all dealt with a bit to quickly and easily and I don't think Ehlena would have been so fast to accept the fact that Rehv was a drug dealer and crime lord. Lover Avenged was an improvement on Lover Enshrined but for me it still didn't reach the heights of the earlier books in the series. I am still looking forward to picking up Lover Mine but I think I need to accept that this series is no longer going to be the paranormal romance series it once was and learn to enjoy it more for the ongoing threads surrounding the brotherhood.