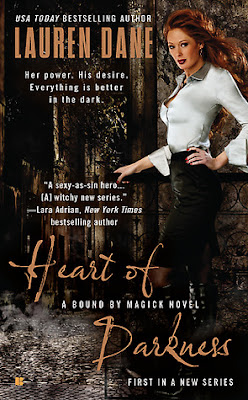 Meriel Owen, next in line to control the largest organization of witches in the country, is asked to investigate the owner of a notorious club reportedly siphoning magick from the font of the clan.  It's a direct violation of the clan's rules, but one look at Dominic Bright and Meriel's willing to make a deal.  One taste of the sexually feral outlaw witch and she's eager to go further: He's her bond-mate, a legal conduit into the world of clan witches and their magick.

Playing by the rules isn't Dominic's style, but bonding with Meriel - night after explosive night - is.  However, Meriel has unwittingly invited someone else into her world: Dominic's mother, a dangerous and poisonously influential magick addict whose lust for death and power corrupts all she touches.  Now her shadow is closing in on Meriel, her clan and the man Meriel loves, and it's casting them all into the inescapable heart of darkness.

Review:
Meriel is a coven witch and has been raised knowing that one day she will take over the role of running the Owen clan from her mother.  As the future leader Meriel has to live up to her mother's high expectations of her which she doesn't always find easy and their relationship is quite strained at times.  Before she can take over her place at the head of the clan she must become a full council member and she is unable to do that until she has met and joined with her bond-mate.

As they discover that witches across the country, both coven members and ones that prefer to go it alone, are disappearing Meriel's mother puts her in charge of the investigation. Meriel must find a way to work with other clans and lone witches to find out exactly what is happening and put a stop to it.  She has also been given the task of contacting nightclub owner Dominic.  It appears he has moved into the area and tapped into the Owen clan's magick without requesting permission and Meriel must get him to either join the clan or disconnect him from their magick supply.

Now I have to admit that I was a bit confused by some of the world building in Heart of Darkness.  I'm not 100% sure how the clans share their magic, how bond-mates work and I was left with a few other questions too but I don't know if that is because some of these have been answered in a different series?  This is the first book I've read by Lauren Dane and I did wonder if this is a spin off to one of her other series but I can't seem to find any confirmation of that on her website.  Possibly because of my confusion I did find the story was a little slow moving at times, I was interested in the world but I seemed to spend a lot of time waiting for something to happen.  The book probably could have been trimmed down quite a bit and been made into a much faster read and I think I would have enjoyed it more if it had been.

Having said that I did still enjoy the book.  I really liked both of the main characters and I was pleased that they didn't immediately jump into a full on relationship despite the obvious chemistry between them and the fact that they are bond-mates.  They took time to get to know each other properly and I enjoyed seeing them spend time together doing the things that normal couples do like going on a dinner date.  Meriel is a strong woman who proved over and over again that she will be a force to be reckoned with as leader of the Clan.  Dominic was an alpha who likes to be in control but he was also prepared to learn from Meriel where she had so much more magick experience than he did.

I really liked the relationships between Meriel and her best friend Nell and Dominic with his business partner Simon.  Simon is a shape shifter and a character I want to see more of so I was pleased to discover the next book in the series is focused on him.  Heart of Darkness is the start of a series that has a lot of potential and I'm looking forward to reading Chaos Burning when it releases in the summer.  I'll also be checking out some of Lauren Dane's back list when I've reduced my to read pile a bit.