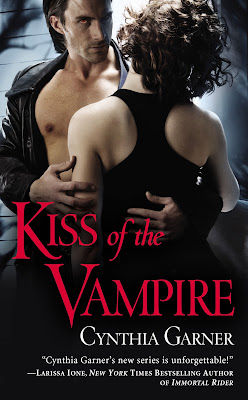 Warriors of the Rift

Once a generation, the rift between the paranormal world and the human world opens, allowing supernatural entities to cross. Vampire, demon, or shapeshifter, they can save the world-or send it spiralling into chaos.

Half-demon, half-human, Nix de la Fuente is accepted by neither and mistrusted by both. Determined to prove she's more human than not, she devotes herself to solving crimes between the world's mortals and its most unsavoury undead. But her latest case brings her face to face with the one vampire she could never resist . . .

Called in to investigate a string of violent murders, special agent Tobias Caine isn't interested in rekindling his relationship with Nix. Yet one look and the vampire knows his need for her is as strong as ever. Once, their all-consuming passion nearly cost Nix her fragile hold on her humanity. Now, as their hunger for one another intensifies, exposing them to an unimaginable danger, it could cost them both their lives.

Warriors of the Rift Series:
Kiss of the Vampire
Secret of the Wolf
Heart of the Demon (2013)

Review:
Once every 73 years a rift between dimensions opens allowing incorporeal beings to get to earth. These beings are unable to survive unless they take over the body of a human host - usually a body that is either dead or dying - and when they merge with their new body they change into either a vampire, demon or shapeshifter. Most of the beings who come through the rift are criminals but Tobias was a law enforcement officer and he followed an escaped prisoner to earth to carry out the punishment he was sentenced to. For over 200 years Tobias has searched for his enemy but he still hasn't been able to take him down.

Nix is half human and half demon, and she constantly has to work at keeping her demon side under control. She is on the edge of both the human and preternatural worlds, not quite belonging in either and not accepted by either group. She works as a liaison between the human police and the preternatural council helping to solve crimes. Five years ago Tobias was the love of Nix's life but then he broke her heart by leaving her. Now they are forced to work together to investigate a murder and the attraction is back in full force but Nix isn't prepared to risk her heart for a second time and Tobias still thinks he is a bad influence on her that brings her demon side to the surface.

I love both paranormal romance and urban fantasy so I was looking forward to starting Cynthia Garner's new series which looked like it straddled the lines between the two genres. I found her idea of a gateway between two different dimensions really interesting but I wanted to know more about where the incorporeal beings came from and quite how they ended up mixing with humans to create such a variety of different supernatural creatures. In some ways I felt it would have been more realistic (in as far as any book with vampires and shapeshifters in it can ever be realistic!) if there was only one type of supernatural being rather than so many different varieties though. Still, the whole idea was an interesting one and I'm sure we will learn more about how it all works as the series continues, it can be a fine line between overwhelming you with information in the first book and not giving you enough and I find a lot of authors end up going one way or the other.

I enjoyed the romance between Tobias and Nix but I have to admit that neither of these characters particularly stood out for me as particularly memorable. Although I understood why Tobias felt he had to leave Nix I don't like the way he went about it, he must have known how little support she had from anyone else and how much she had come to rely on him so it was particularly cruel and heartless to dump her like she'd never meant anything to him. Then he comes back on the scene and pretty much expects her to pick up where things left off but with no commitment which was completely unrealistic. I actually liked Nix's human colleague Dante much more and spent the early part of the book hoping Nix would kick Tobias to the kerb and go out with Dante instead. Tobias did win me over in the end but I was disappointed with the ending which felt a little rushed.

Overall I have really mixed feelings about Kiss of the Vampire. It wasn't the best start to a series that I've ever read but it was far from the worst too. I'm curious enough about the world to want to read more and finding out that Dante is the hero of Secret of the Wolf is enough to make me pick up the next book. Hopefully the series will just get stronger with each instalment.