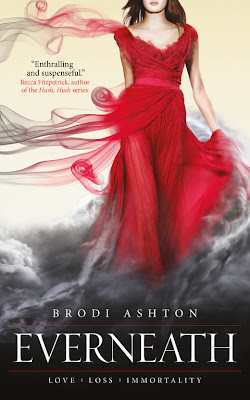 Six months ago, Nikki Beckett vanished into an underworld known as the Everneath.

Now she's returned to her old life for another six months before the Everneath comes to claim her . . . this time forever.  Nikki longs to spend this precious time reconnecting with the people she left behind - her family, her friends and, most importantly, her boyfriend, Jack, the one person she loves more than anything.

But there's just one problem: Cole, the smouldering immortal who enticed her to the Everneath, has followed Nikki home, convinced that she is the key to claiming the throne of the Underworld.  Cole wants to bring Nikki back to the Everneath, but this time as his queen.

Everneath Series:
Everneath
This is a planned trilogy but release dates and titles for the next 2 books are currently unavailable.

Review:
After a series of devastating events Nikki made the drastic decision to go to Everneath (the underworld) with Cole who promised he would take away all her pain when they were there.  As far as her friends and family are aware she has been missing for 6 months but time in the Everneath works differently and as far as she is concerned she has been gone for 100 years.  Now she has been allowed to return to the surface but she only has six months to make peace with those she left behind before she will be forced to return to Everneath - this time forever.

After spending 100 years with Cole feeding off of her emotions Nikki has returned just a shell of the person she once was.  She doesn't feel like she will ever be able to laugh or cry again - that amount of feeling is beyond her now.  She soon realises that she is different to the others who have been taken to the Everneath though and Cole seems desperate to convince her to go back with him.  But just what is so different about her and why is she so important to the Immortals like Cole?

Everneath is a great debut from Brodi Ashton and has me excited to see what happens in the next two books in the trilogy (I wish there was some information available about when the other books will be released!).  This first instalment of the series was an emotional read, more character driven than action packed but still a book that had me hooked from beginning to end.  Nikki has to face the things that happened before she was taken to Everneath and she has to try and make amends for the way she left things with her family, friends and boyfriend.  She realises that not everything was as it seemed and she has to face just how hard her disappearance was for everyone she left behind.  Knowing that she will be leaving again in six months makes things doubly hard for her - she wants to part on better terms than the last time but how can she do that without explaining why she will vanish again?

Nikki's boyfriend Jack was devastated when she disappeared the first time and the last thing she wants to do is hurt him again but she can't help being drawn to him.  He was the one thing that she remembered after her time in the Everneath and he was the reason she most wanted to return.  When she realises how hurt he will be when she leaves him for a second time she tries to keep her distance but Jack isn't going to let her get away with ignoring him.  The romance between them was one of the sweetest I've read about in a long time and Jack is completely swoon worthy!  The ending was bittersweet and left me desperate to find out what happens next.

I really enjoyed the author's use of Greek mythology in the story and it made me want to find out more about the original story of Persephone and Hades.  I really don't know enough about Greek mythology and I must do something about that.  Overall I felt that Everneath was a great start to a new series and it is one I'd highly recommend to anyone who enjoys a good paranormal romance that is a bit different from the norm.  I can't wait for the next instalment!