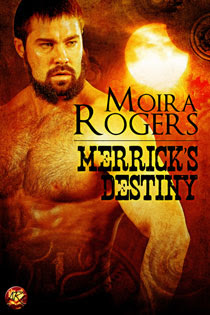 A short story set between Wilder's Mate and Hunter's Prey.

Merrick Wood is a wild man--literally. For six decades he's stalked the Rocky Mountains as a bloodhound, fighting a losing battle against the vampires who have taken over most of the American frontier. He's sure he's seen it all, until an airship crash leaves him caught behind enemy lines with a concussion and a mate he doesn't remember taking.

Paralee Colton is a wild woman. She enjoys her freedom and makes a good living flying over the Deadlands. Until, that is, bloodsuckers shoot down her ship, and she's forced to deal with an irritatingly attractive man who isn't a man at all.

Trapped together in the wilderness, Merrick and Paralee must fight to find a safe camp before the new moon drags Merrick into three days of sexual madness. But as enticing as Paralee finds the bloodhound, she doesn't realize the stakes of their courtship game.

Getting out of the Deadlands is only half of Merrick's battle for survival. If he can't convince Paralee to stay with him, he'll follow the footsteps of every bloodhound who's ever lost a mate--straight into the grave.

Review:
Merrick's Destiny is a short story set just after Wilder's Mate, the first book in Moira Roger's Bloodhounds series.  It is an exclusive story only available from All Romance Ebooks but can be downloaded in various formats for whichever ereader you have.  Although the story is officially numbered 1.5 in the series it works well as a stand alone and could be a great way to try out the series to see if you like it.  I find it is hard to classify the Bloodhounds stories as they are all paranormal romances with a steampunk and wild west feel to them.

After Paralee's airship crashes in the Deadlands she and Merrick are the only survivors and must work together to get back to safety.  When Merrick comes around he can remember none of the lead up to the crash, the only thing he knows is that Paralee is his mate which comes as quite a shock considering he has spent decades alone.  What he can't understand is why he hasn't claimed her yet but he is determined to do just that - once he gets them safely away from the Deadlands and the vampires who will start hunting them as soon as it gets dark.

I'm always impressed by how much Moira Rogers can fit into a short story, they always manage to get me to connect with the characters no matter how low the page count is.  Merrick is a great hero, I have to admit I wasn't a big fan of this cover compared to others in the series but now having "met" Merrick I have to say it fits him perfectly.  He is tough and a little rough around the edges but he has a good heart and wants to protect Paralee.  He doesn't want to force her into accepting the mating bond - especially when she doesn't understand the full long term consequences.  I love the fact that Paralee is an independent woman who is capable of looking after herself, she knows what she wants and is prepared to work hard for it.  She is wary of getting too close to Merrick and losing her independence but she doesn't try to fight the attraction between them - she knows she wants him and has every intention of having him.

I really enjoyed finding out more about the Bloodhounds and their history and loved spending time in the world Moira Rogers has created.  This is a series I can't wait to continue (my review of Hunter's Prey will be posted later today) and it's one I'd highly recommend to fans of paranormal romance and steampunk.  If you like your stories scorching hot then you don't want to miss Merrick's Destiny!

Other Reviews:
If you have reviewed this book on your blog please leave a link to your review in the comments & I'll add the link here
at 09:00