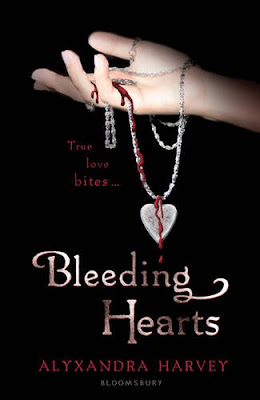 It's not easy being the new girl in town, and Christabel Llewellyn is certainly that.  She's new to Violet Hill, new to country life, and new to vampires.  Which, considering she's Lucy Hamilton's cousin, is going to prove problematic . . . Lucy's boyfriend is one of the Drake brothers, her best friend is a Drake princess, and all of the Drakes are vampires.

But they aren't the only undead to reside in Violet Hill.  The town is infested with a very different and entirely more dangerous type of feral vampire, the Hel-Blar.  And when Christabel is kidnapped by their leader and held to ransom, the Drakes are forced into action.

Review:
Christabel has moved to Violet Hill while her Mum is in rehab and is staying with her cousin Lucy.  She is used to city life and can't understand why her aunt and uncle are so obsessed with curfews and not letting the girls out after dark - surely life in a small hippie community can't be that dangerous? Of course Christabel has no idea about the Hel-Blar vampires that are currently causing havoc in the area, she doesn't even know vampires exist. Lucy is working hard to keep the Drake family's secrets but when Christabel is kidnapped she gets thrown into the vampire world at the deep end. The question is can the Drakes save Christabel from the Hel-Blar who have taken her?

This really is turning into one of my favourite YA vampire series, each book is so much fun to read and they always make me laugh out loud.  Add in the gorgeous Drake brothers and I'm completely hooked! Bleeding Hearts is the fourth book in the series so this review may contain minor spoilers for earlier books. If you're new to the series then I'd strongly recommend starting with the first book My Love Lies Bleeding (or Hearts at Stake if you're in the US) but it's a series you definitely want to be reading. Whether you're a vampire fan or not if you like fun stories with strong characters and a great sense of humour you'll love this series.

Each time I pick up one of these books I change my mind about which brother is my favourite and this was no exception - after all who doesn't love a geeky guy like Connor? Let's face it as a book blogger I'm a bit of a geek myself so Connor definitely did it for me. Connor is used to having people underestimate him because of his geeky status but he is much stronger than they realise "People always assumed I was weak and socially awkward because I liked comics and computers. I used it against them all the time." He may not be a ladies man like his twin brother Quinn but that's more because he hasn't found a girl he is interested in than because the girls aren't interested in him. Connor has the Drake brother good looks, he's charming in an understated way and he has the fighting skills he needs to protect those he cares about.

Christabel is even more book obsessed than I am which is saying something. She spends her whole life with her head buried in one of the classics or quoting poetry that she has memorised and I think any book crazy girl will be able to relate to her. I loved the way she stood up for herself against the school bully (you can tell she's related to Lucy!) but I also liked the fact that she wasn't quite as kick ass as the other heroines from this series. She hasn't grown up in a world of vampires learning to defend herself so it would have been unrealistic if she'd taken to using stakes too quickly. That doesn't mean she sits around waiting to be saved, she does her best but doesn't instantly become a perfect fighter.

I have to admit what I loved most about the story was that we get to read some of it from Lucy's point of view again. She has been my favourite character since the first book and it was great that she had a bigger part to play in this book. Spending more time with her and Nicholas reminded me just how great a couple they are and it was also good to see more of Hunter and the Helios-Ra. While I enjoyed the romance between Connor and Christabel it was the action that had me on the edge of my seat. There were times I was genuinely concerned for the safety of more than one of the characters and I'm not going to confirm if they all make it to the end of the book or not - you'll have to read it for yourself to find out! I will say that the story ends on a killer cliffhanger though and I'm desperate to get my hands on Blood Moon - luckily it is published in the UK in June so there isn't too much longer to wait!