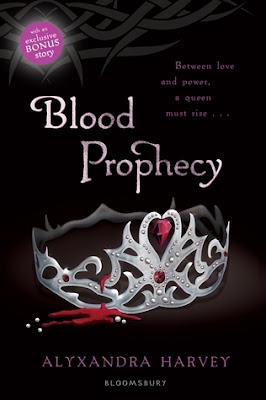 'It is done.'
She bowed in my direction. 'Hail the queen.'
I cringed, holding the bloody crown in my hands.

Solange Drake will deny her birthright; she will not be queen as vampire tradition dictates. But change always comes at a cost . . .

Consumed by visions, Solange commits heinous crimes against the vampire tribes. Trust is broken and the treaty between the Drakes and the Helios-Ra is threatened. To fight for the fate of the royal crown - and win - Solange must find the strength to unfold time and memory and free herself from the mind of a vengeful twelfth-century witch.

Her destiny, and her heart, depends on it.

Review:
Blood Prophecy is the 6th and final book in the Drake Chronicles series so please be aware that although I won't include spoilers for this book I will be mentioning events from the previous 5 stories. If you're not up to date with the series then you probably shouldn't continue reading so I'll just say that this is a fabulous conclusion to one of my favourite series and I'd highly recommend giving it a try if you haven't already. I love the humour and sense of family loyalty throughout the series and I dare anyone not to swoon over at least one of the Drake brothers! I have to admit that I was nervous about picking up Blood Prophecy, not so much because I didn't think I'd enjoy it (I've yet to come across something written by Alyxandra Harvey that I haven't liked) but because I didn't want the series to end. I have thoroughly enjoyed my adventures with the Drake family and I didn't want to reach the end of the journey. As much as I'm sad that it's over I would prefer to have a series go out on a high than drag on until I'm bored with it so I think it's ended at a good point and it left me feeling satisfied with the outcome.

The story picks up straight after the ending of Blood Moon and is told from the perspectives of both Lucy and Solange with occasional chapters narrated from previous heroines Christabel, Hunter and Isabeau. The Drake family are still reeling from Solange's actions at the end of the last book, they still can't quite believe that Solange took the crown from her mother and has banned the entire family from the Blood Moon ceremonies. They believe that Solange is suffering from blood lust but Lucy is the only one who recognises that something much worse is at play, she knows her best friend better than she knows herself and there is no way Solange would have acted in the way she did of her own volition. Lucy has a theory about what is going on but she must convince the rest of Solange's family that she is correct and then they have to try and figure out a way to help her. At the same time Dawn is still causing trouble trying to set the Helios-Ra and the Drake family against each other and hoping to cause widespread panic by letting the human population learn about the existence of vampires. The Drakes have their work cut out if they are going to keep things together but Solange is also fighting the battle of her life, one that could cost her everything if she loses.

Lucy has always been my favourite character in this series and that hasn't changed, I love her friendship with Solange and her relationship with Nicholas but most of all I love the way she refuses to take a back seat just because she is human. She knows being human puts her at a disadvantage physically but that doesn't stop her training her butt off so that she can fight for those she cares about. I had found myself a little mystified at the changes in Solange in the last book so it was good to uncover the reason behind her attitude. In this instalment she is much more like her old self but she really doesn't have it easy trying to fight an enemy that she can't even see. I enjoyed her part of the story much more this time around and I was impressed with how much her character has grown from the very beginning of the series. I don't really know what else I can say about Blood Prophecy without giving spoilers so I'm just going to tell you that fans of the series won't be disappointed. This book has everything that you'd expect from the series and is an action packed and explosive finale that you won't want to miss out on.

The UK paperback also includes the Sound and Fury novella as an added extra. This story fits into the time line just before Blood Prophecy starts and gives Solange's older brother Duncan his chance to shine. It's a fairly short story at around 30 pages but it was action packed and hinted at a future romance between Duncan and new vampire Sky. It's a cute little story and it was nice to get to know Duncan a little better. I really wish we'd been able to spend more time with him and some of the other older Drake brothers throughout the series so I'm hoping that Alyxandra Harvey will revisit them in the future either as part of a spin off series or just through a series of novellas.