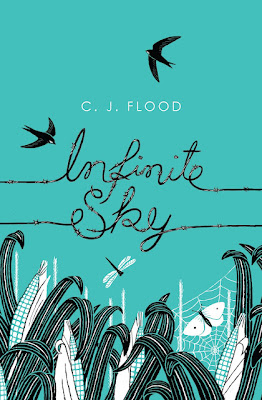 Iris Dancy’s free-spirited mum has left for Tunisia, her dad’s rarely sober and her brother’s determined to fight anyone with a pair of fists.

When a family of travellers move into the overgrown paddock overnight, her dad looks set to finally lose it. Gypsies are parasites he says, but Iris is intrigued. As her dad plans to evict the travelling family, Iris makes friends with their teenage son. Trick Deran is a bare knuckle boxer who says he’s done with fighting, but is he telling the truth?

When tools go missing from the shed, the travellers are the first suspects. Iris’s brother, Sam, warns her to stay away from Trick; he’s dangerous, but Iris can no longer blindly follow her brother’s advice. He’s got secrets of his own, and she’s not sure he can be trusted himself.

Infinite Sky is a family story about betrayal and loyalty, and love.

Review:
Ever since her mum left Iris's family has been falling apart, her dad has been drinking too much and her brother Sam has become angry and withdrawn. Iris is only 13 years old but she is the one who is trying to hold them together, she does her best to take care of the house and cook for them all but it isn't easy and she's left feeling sad and alone. The day a family of travellers move onto their land changes everything, her father and Sam are both angry and want the travellers gone but Iris can't help but be curious about them. As she secretly gets to know Trick she realises that her family's prejudices against him aren't true and they form a close friendship that helps them both through some difficult times. As tensions increase between the two families Iris and Trick are caught in the middle but when tragedy strikes who will be the last one standing?

Infinite Sky is the kind of book that doesn't come along very often, one of those stories that touches your heart and will make you shed a few tears but that will also make you smile along the way. It's very clear from the prologue that something terrible has happened, Iris is at the funeral of someone she is close to but you are given no indication of who it is that died. The story then begins several months earlier and you spend the summer watching Iris blossom from a child into a young adult as she falls in love for the first time. At the back of your mind you always know that something bad is coming but that sense of foreboding doesn't make the journey any less enjoyable, in fact I think it is what makes this quite such an addictive read.

I don't want to go into much more detail about the story because I think it is a book that needs to be savoured and is best read with as little knowledge as possible. I'd rather talk about how much I loved the characters, Iris is a young girl that I think most people can relate to. She is going through a difficult time at home and is at that age when you start to question the things you are told and stop believing everything just because a parent tells you it's true. She is learning some hard truths about family and friendship and her experiences help shape her into the woman she is going to become. Iris is constantly being told that the travellers are bad news but she wants to make up her own mind about them by getting to know them. She is smart enough to realise that no family is perfect and that we should react to people based on the way they treat us not because of someone else's prejudice.

I didn't feel we get to know Trick as well as we know Iris, probably because the story is told from her point of view, but we know enough about him to hurt on his behalf when he is bullied and picked on by local teens. The events that unfold towards the end are heartbreaking and I think it was made even worse by the fact that that people who are most to blame are the ones who walk away from the incident unaffected. Infinite Sky is a book that will make you think, it touches on difficult themes but does so in a sensitive manner. The writing is beautiful for it's simplicity and it's hard to believe that this is C.J. Flood's debut novel, I know I'll automatically be reading anything she writes in the future. If you haven't already fallen in love with Infinite Sky then I urge you to pick up a copy as soon as possible, the setting makes it a perfect book for reading on a lazy summer afternoon and I'm sure you won't regret giving it a chance.