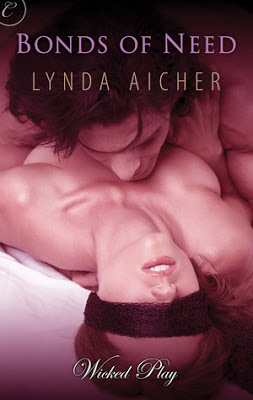 When Kendra Morgan attends a party at an exclusive sex club, she's not driven by mere curiosity. Hoping to prove she's put the past behind her, Kendra must instead face up to needs she's denied for too long. Despite her lingering fears, she can't resist the temptation to play…

With Deklan's guidance, Kendra begins to accept her forbidden needs and to recognise the fine line between pleasure and pain. But when her former Master returns to reclaim her, it will take all her courage—and all of Deklan's love—to defy her past.

I really enjoyed the first book in this series, Bonds of Trust, but I have to say I enjoyed this 2nd instalment even more. I really liked the way the relationship developed between Kendra and Deklan, I felt her reactions to him were realistic considering what she had been through and I respected Deklan for the way he was so sensitive to Kendra's needs. Kendra had been so badly abused in the past and she believed it was her fault because she had initially asked her ex to spank her. Eric had blamed her desires for the way he treated her and it left her feeling like her needs were dirty and something she should be ashamed of. It took time for her to come to terms with the fact that Eric was the one with a problem and that there is a big difference between consensual BDSM and abuse. Deklan opened her eyes to the way a Dom/sub relationship should work and helped her to realise that she had the power to stop their play at any time.

Deklan is the kind of guy who has always looked out for those around him so it was natural that he would want to take care of Kendra. I liked the fact that he let her fight her own battle in the end though, he just made sure she realised that he would always be there as her backup if she needed him. The reappearance of Kendra's ex Eric added a nice element of suspense to the story and I'm so pleased that she didn't go off on her own to do something completely stupid like so many heroines I've read about. She makes a stand but does it without putting herself at risk. If ever there was a character who I wanted to see get his comeuppance it would be Eric, the things he did to Kendra were beyond despicable and I wanted to reach into the book and crush him like a bug! I'm not going to say how things work out in the end but I will say I was happy with the outcome. Bonds of Need is a great instalment to the series and I'm definitely looking forward to getting my hands on Bonds of Desire when it is published in July.