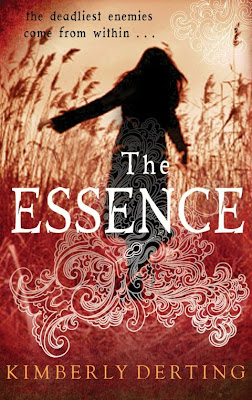 I knew who whispered inside my head. Sabara.
She was still here.
Living inside my body.
Taunting me.

Seventeen-year-old Charlaina, overthrower of Queen Sabara's brutal regime, is now sovereign of Ludania. While seeking to bring equality to her previously divided country, Charlie also struggles to adjust to the responsibility thrust upon her. Not everyone is happy with their new Queen - a burgeoning resistance to Charlie's rule is rapidly gaining momentum. And external enemies are not the only ones Charlie must contend with. Though it has been months since her demise, Sabara's influence is far from over. The evil queen's Essence has fused with Charlie's psyche and is viciously fighting to overpower her. Pushed to the brink of exhaustion, can Charlie perform her royal duties, combat Sabara's influence, and face an ultimate betrayal?

The Pledge Series:
The Pledge
The Essence
There will be a third book in this series but the title and release date are currently unknown

Review:
I really enjoyed the first book in Kimberly Derting's dystopian fantasy series and I've been looking forward to reading The Essence for a year now. I have to admit that it's been so long since I've read The Pledge that I was a little hazy on the finer details of what happened in the story, I knew I'd enjoyed it and I remembered the main plot but I had trouble remembering who all of the minor characters were and was a little worried that was going to reduce my enjoyment of the next book. That is one of the hazards I'm finding now that I'm reading so many different series and having to wait a whole year between each instalment, especially since I, unfortunately, no longer have time to reread series before I start the latest book. Thankfully in this case Kimberly Derting did a great job of jogging my memory about the important things and within a few chapters I was fully sucked back into the world she has created.

Charlie is now the new queen of Ludania (after winning against Sabara at the end of the last book), she has been ruling for several months and is determined to bring about equality for all of her citizens. Where people were previously separated by a class system and not even allowed to speak the same language she has decreed that everyone must speak the common language and people will be allowed to do whatever jobs they would like. While this has gone down well with the people from the lower classes it hasn't been a popular move with those who think they are above the rest of the citizens. There has been a lot of resistance and the protests are becoming more and more troublesome. Charlie isn't only faced with trying to keep the peace within her realm though, she must also face meeting the rulers of the other kingdoms and see if she can gain important allies for herself and her people. It quickly becomes clear that someone is working against her but it is hard to know where to turn or who she can trust. As if that wasn't enough to deal with Charlie is also fighting an internal battle, Sabara wasn't completely destroyed and a part of her is buried within Charlie, fighting to take control.

You have to admire Charlie for the changes that she is trying to make within her country, she wants all of her people to have the same opportunities and she is determined for make that happen. This makes her incredibly popular with half of the citizens but resented by the rest. A change that big isn't going to happen overnight and she has many enemies who want to make sure she doesn't succeed. I enjoyed seeing how she interacts with the people around her and how she struggles with people treating her as the queen. She is used to being a normal girl and hates having people bow down to her but it is something she knows she will have to get used to. It was also interesting to see how she reacted to the rulers of the other realms, she seems to have made some interesting allies but you have to wonder how much of what people are saying to her is really the truth and how much is them just keeping her onside while they work out how they can use her.

One thing I did find a little disappointing was the fact that we don't see that much of Max in this instalment. I understood why that was the case but I missed the budding romance between him and Charlie because I love them as a couple. I was a bit worried that we might be seeing the beginnings of a love triangle with a new character who is introduced but it didn't go as far as I feared it would and I have high hopes for more of Max and Charlie in the last book of the trilogy. The Essence is a great story and a book that fans of The Pledge are sure to love. I'm now going to spend the next year looking forward to the final instalment!

Source: Received for review from Allison & Busby in exchange for an honest review

Other reviews of this book:
Escapism from Reality
If you have reviewed this book on your blog please leave a link to your review in the comments & I'll add the link here.