Johanna Walker is used to taking charge. But she's about to meet someone who will make her lose control . . .

It has always been up to Johanna to care for her family, particularly her younger brother, Cole. With an absent father and a useless mother, she's been making decisions based on what's best for Cole for as long as she can remember. She even determines what men to date by how much they can provide for her brother and her, not on whatever sparks may - or may not - fly.

But with Cameron MacCabe, the attraction is undeniable. The sexy new barman at work gives her butterflies every time she looks at him. And for once, Jo is tempted to put her needs first. Cam is just as obsessed with getting to know Jo, but her walls are too solid to let him get close enough to even try.

Then Cam moves into the flat below Jo's, and their connection becomes impossible to ignore. Especially since Cam is determined to uncover all of Jo's secrets . . . even if it means taking apart her defences piece by piece.

Review:
With an alcoholic, dysfunctional mother and a father who disappeared years ago Jo has been taking care of her family since she was 16 years old. Forced to leave school and get a job just to pay the bills she never had much of a childhood but she is determined life will be better for her younger brother Cole. Everything she does is done in Cole's best interest, even when it comes to the guys she dates it is more about how they can help her financially rather than how much she loves them. That is until she meets Cam, he is the one man who tempts her to put her own needs first, she finds it impossible to deny the attraction she feels towards him but she is determined to keep him at a distance. That becomes impossible when Cam moves into the flat below hers though. Cam is intrigued by Jo and wants to get to know her better, she isn't the person he first thought she was and that just makes him want to break down her barriers and learn all of her secrets. Can he convince Jo that they could be good together?

I was a huge fan of On Dublin Street so I've been eagerly waiting for Down London Road ever since I finished reading it. I have to admit that I was a little disappointed when I found out that this was Jo's book, I'll admit that I had judged her based on what we saw of her in the first book and I thought she was a gold digger and not someone I was interested in seeing more of. It just goes to remind me that we shouldn't judge a book by it's cover though, Jo is nothing like I expected her to be and my opinion of her completely changed within the first couple of chapters. She isn't perfect and she does tend to look at men in terms of what they can do for her but she obviously cares for the guys she dates and I think deep down she is a romantic who was looking for a rich prince charming to sweep her off her feet and protect her and her brother. She's had a tough life, she works two jobs just to make ends meet and she does everything she can to make sure Cole has a better life than she did. She is saving every penny she can so he can get the good education that she missed out on and she does her best to protect him from their mother's drunken ranting outbursts. Some people would have probably walked away from their family as soon as they were old enough but Jo sticks around for Cole's sake and you have to admire her for that. She doesn't always make the right decisions, she can be a bit on the ruthless side, especially when it comes to men, but everything she does is done with good intentions and you can't really fault her for that.

Cam was actually an a-hole when he first met Jo. Like me he judged her on first appearances and found her wanting and he wasn't shy in letting her know just how much he disliked her for it. I was really quite concerned for a few minutes that he wasn't going to be a worthy hero but I should have known better and trusted Samantha Young to come through for me. Cam makes mistakes but he is man enough to admit it when he realises he is wrong, he feels terrible when he understands how badly he misjudged Jo and he goes out of his way to make it up to her. I think the reason he reacted so badly towards her in the first place was because he was so attracted to her and didn't think he stood a chance because he wasn't the kind of rich guy she'd be interested in. That doesn't excuse his behaviour but it does make it more understandable. When we get to know him we start to see what a sweet guy Cam really is, he grows to care a lot for Jo and he understands how important her family is to her. He really takes Cole under his wing and is a good influence on both of them. They make a great couple and it is impossible not to route for them.

One of the things I enjoyed most about the book was the dynamics between Jo and Cole, Cole is like the typical 14 year old boy but he loves his sister and appreciates everything she has done for him. They have such a great bond and I really enjoyed seeing them spend time together. I know that the biggest question fans of On Dublin Street will have is do we get to see more of Joss and Braden? You'll be pleased to know that they both have fairly large roles in the story and it was great to catch up with both of them along with Ellie and Adam. The stars of the show are definitely Jo and Cam but we see plenty of the other characters we know and love.

I expected to enjoy Down London Road but I never thought Samantha Young could make me fall for another couple even harder than I fell for Joss and Braden. I'm happy to say that is exactly what she did though, Jo and Cam were so good together and I just loved everything about this book. The romance is sweet and sexy, the family dynamics were great, Jo has a strong network of friends who she learns she can rely on to help her and the ending just left me with a huge smile on my face. I don't think it would have been possible to change anything in this book to make me like it more and it has just left me even more excited to get my hands on anything else that the author writes in the future. If you enjoyed On Dublin Street you're going to LOVE Down London Road!

I'm just going to leave you with this teaser that Samantha Young posted on her website: 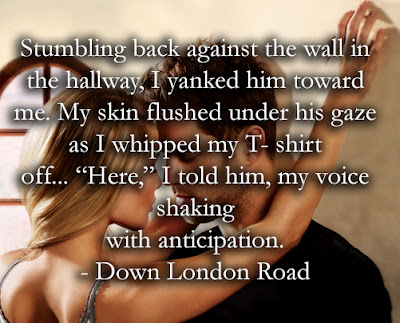