Review: Own the Wind - Kristen Ashley 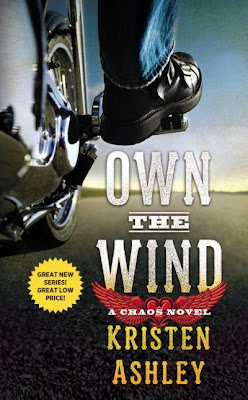 Too hot to handle...

Tabitha Allen grew up in the thick of Chaos--the Chaos Motorcycle Club, that is. Her father is Chaos' leader, and the club has always had her back. But one rider was different from the start. When Tabby was running wild, Shy Cage was there. When tragedy tore her life apart, he helped her piece it back together. And now, Tabby's thinking about much more than friendship...

Tabby is everything Shy's ever wanted, but everything he thinks he can't have. She's beautiful, smart, and as his friend's daughter, untouchable. Shy never expected more than friendship, so when Tabby indicates she wants more--much more--he feels like the luckiest man alive. But even lucky men can crash and burn...

Chaos Series:
(This is a spin off from the Dream Man series)
Own the Wind
Fire Inside (June 2013)

Review:
I've been hearing great things about Kristen Ashley's books for a long time now but although I've had several of her books on my wish list for ages I still hadn't got around to buying any of them. When I got the chance to request a review copy of Own the Wind I couldn't resist though and I'm glad I now know what all the fuss is about! Own the Wind is the first book in Kristen Ashley's new Chaos series revolving around members of the Chaos Motorcycle Club, this is actually a spin off from her Dream Man series, well the last book in the series, Motorcycle Man, anyway. Motorcycle Man is the story of the Chaos MC leader Tack and the heroine of this story is his daughter Tabby. I've already mentioned that this is my first KA book so I can confirm that you don't have to have read the other series to follow the events in this one but I will tell you that I'm definitely planning on working my way through the Dream Man series (and the rest of KA's back list!) while I wait for the next Chaos book, Fire Inside, to release.

Before I actually start my review I should probably point out that this isn't going to be the book for everyone, these kind of Motorcycle Club (MC) romances tend to be love or hate books. You've probably already guessed that I love them (this is only my second but I'd also highly recommend Reaper's Property by Joanna Wylde) but I do have to be in a certain mind set before I start reading. I'm speaking from a limited experience but MC romances tend to feature very alpha guys, ones who often have a very sexist attitude towards women - especially ones they consider an easy lay. These guys live outside normal rules but they still have a very strict code of honour, just not necessarily one that follows the letter of the law. They fight for what they want, protect what they see as theirs and like to party. The women who hang around the clubs tend to belong to one of two categories, you have the ones who are just there for fun, who will happily sleep around with the club members and who are just kept around by the guys for sex on tap and to tidy up after them. These women aren't respected and the guy's attitudes towards them usually sucks but they're there of their own free will and you only get treated the way you let people treat you. The other women are a completely different kettle of fish, they are the ones that have won the heart of a MC member and are usually referred to as old ladies. The men respect them (and any children they may have), they will lay down their lives to protect them and nobody would dream of touching another man's old lady. I'll say upfront that I wouldn't want to live this lifestyle but I still find it fascinating to read about these tough guys and the women who bring them to their knees. I can separate reality from fantasy and enjoy these stories for what they are but if the above makes you want to scream in frustration (and I can understand why it might!) then you're going to want to give this type of book a very wide berth.

OK, so now I've got that warning off my chest let's talk about Own the Wind specifically. Tabby's father, Tack, is the leader of Chaos MC so she has grown up surrounded by bikers and understands the lifestyle. She has always known that the members of Chaos have her back and she is close with a lot of them but she has still managed to make a life for herself away from the club, she studied hard to become a nurse and she likes being independent. Tabby had a crush on Shy when she was in her teens but when she was going through a rebellious phase Shy tried to warn her off the path she was heading towards and the way he did it both embarrassed her and broke her heart. Since then she has given him the cold shoulder but when tragedy strikes it is Shy who is there to help her put the pieces of her life back together. I loved the fact that they became friends first, after everything Tabby had been through she needed someone who was going to look out for her and I wouldn't have believed in them as a couple if Shy had made a move on her any sooner than he did. Shy is the kind of guy I would run a mile from in real life but as much as he can be an ass he could also be very sweet and caring towards Tabby. I did love the way he looked out for her and the fact that he was prepared to give up everything to be with her if that's what it took.

I ended up devouring Own the Wind, it's the kind of story that sucked me in and held me completely gripped until the last page. I did find the time jumps a little confusing at first but once I got used to the writing style it made a lot of sense and allowed us to get a real sense of the way things developed between Shy and Tabby over time. I loved meeting the various side characters and am really looking forward to reading Hop and Lainie's story in Fire Inside but what I'm really hoping more than anything is that we're going to see more of Shy's brother Lan. I think I fell for Lan just as much as Shy which is quite an achievement considering he doesn't get anywhere near as much page time and I would LOVE to see him get his own happy ending. Note to the author - just send him my way and I'll make sure he gets one LOL. So, Kristen Ashley has found herself a new fan in me and I'm looking forward to working my way through her back list in the near future.