Guest Review: Everything is Fine (and Other Lies I Tell Myself) - Cathy Brett

Today I have a guest review from the lovely Kirsty at The Overflowing Library. Kirsty is a fab blogger and a great friend so if you've never visited her blog make sure you drop by and see her. Thanks for letting me post this as a guest review Kirsty! This review will also be appearing on Kirsty's blog. 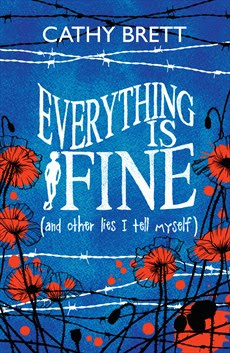 Things haven't been going so well for fifteen-year-old Esther Armstrong. With her brother Max - her closest ally - absent, she's forced to face everything alone, not least her parents' heated arguments. As the summer holidays stretch endlessly ahead, she's desperate for something, anything, to divert her attention.

Then she finds some letters hidden in the walls of her family home, sent by a soldier to his sweetheart from the trenches of WWI. Esther is consumed by the mystery of these lovers - not very much older than herself - and what became of them. Perhaps in piecing together the jigsaw of someone else's life, Esther can work out how to reassemble her own, and how to make everything fine again...

This is a novel about growing up, moving on and the strength of a family.

Kirsty's Review:
I've heard nothing but good things about Cathy Brett's books and while they are aimed at a slightly younger audience than the books I usually read I was keen to give them a go. As soon as I saw the cover for this one with the hints of a World War One theme the history geek in me had to pick it up instantly.

This book is essentially the story of Esther and her life as she currently sees it. Esther lives in a seaside town and is missing her elder brother who currently isn't at home and the story switches between Esther's narratives and letters to her elder brother Max as well as snippets from a series of letters Esther finds. In addition to this the book had a series of pictures dotted all the way through. I really loved the format of this book as it mixed it up a lot and I think for younger readers the variety would certainly help to engage interest. Esther is a fab character to follow. She is a strong character without being arrogant and just brilliantly normal as teenagers go. I really felt this book captured her really well as you really get an insight into what life is like living in a seaside village for a teenager who is dealing with a whole host of things all at once. I really loved seeing how her own personal story developed particularly the way she dealt with the absence of her elder brother.

The history geek inside of me went nuts over the historical side of the story. I would say too much but Esther finds a series of letters from a solider to his sweetheart behind her fireplace and these letters completely draw Esther in. She becomes fascinated with the tale that unfolds in front of her in the letters and devotes time and energy into finding out more about the people named in them. I loved this little touch and equally got drawn into her search for answers.

Overall this is certainly a book I will be recommending in the future widely but particularly to my students because of the historical side to the story.