It has been a long time since I posted an Author's Animal Antics post but I've always enjoyed them so I was really excited when Cat Patrick offered to share a couple of animal related stories for The Originals blog tour. I loved Cat Patrick's debut novel Forgotten (read my review here) so I couldn't wait to read her latest book The Originals. She always comes up with such unusual stories and the idea of three clones living together and pretending to be one person fascinated me. I'll be posting my review of The Originals later today but I'll tell you right now that it is such a fun read and one I'd definitely recommend. 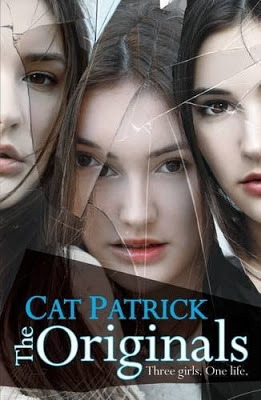 I glance at the three baby portraits in thick wooden frames.
I feel a familiar prickling on the back of my neck.
Because I know there's another picture somewhere- and the baby in that photo looks identical to the babies on the wall.
Somewhere, there's a photo of the Original.

But that's not all.

We are clones in hiding. We split our lives and exist as one person in the outside world. And we've always been happy.

But now I've fallen head-over-heels in love . . . and that changes everything.

Because, to let love in, I need to be allowed to be Me.

Now please give a very warm welcome to Cat Patrick!


Animal Antics with Cat Patrick, author of The Originals

Thanks for having me on the blog today. As someone with an allergic husband, my family doesn’t have pets, but I do have two animal stories to share. The second is a scaredy cat story—the Cat in the story being me—and the first is related to my book, The Originals, which is about three identical clones who live as one person to hide from the world.

A friend teased me about the name of Sean Kelly’s dog in The Originals—Dumptruck—so I thought I’d tell you where it came from.

One of my twins is named Lucy. She’s smart and quirky and likes things her way. We moved to a new town and met a neighbor’s dog for the first time: an adorable Dachshund who also happens to be called Lucy. Two at the time, my Lucy proclaimed that the dog Lucy could clearly not share her name. “Lucy is a girl name, and that is a dog, and she needs a dog name…like Dumptruck.”

The nickname stuck—we call Lucy the dog Dumptruck to this day—and when it came time to describe Sean’s four-legged friend in the book, that’s who was on my mind.

(Note from Sarah: This isn't Cat's picture of Dumptruck,
it's just an image I found online to give you an idea of what he looks like)

One year when I was very small, my older sister got a kitten for Christmas. The kitten was called Jenny, and she looked like black and white tiger. She was very cute, though not nearly as cute as my yellow lab, Sam.

At the time, my sister and I shared a small bedroom in the back of the house. My bed was the trundle that pulled out from under hers, cause she was older and got to claim things like beds with stationary legs. The only problem was that the trundle was broken, and sometimes either the head or the foot would collapse without warning in the middle of the night. So, for example, when the foot side went, I’d slide out of bed and end up a tiny pile of kid on the floor. (Thanks, Mom and Dad.)

Cute as she was—though not as awesome as Sam—turns out Jenny Kitty was actually kind of a jerk. She was a foot biter. The moment I’d put my feet under the covers at night, Jenny would pounce on them like they were mice, biting and batting at them until they stopped moving. And she had sharp teeth! Living in fear of the tiny kitty, my nighttime regime went something like this:
The nighttime hours became all about avoiding a cat-tack. And I got pretty good at it, until one night, all hell broke loose. (Or as much hell as a four-year-old can conjure.) I’d followed the regime. I was stiff as a board, barely breathing. Jenny Kitty was prowling the room like a tiger looking for a lame zebra. But, committed to being still as Han Solo in carbonite, I was winning.

Then the bed broke.

It was the head of the bed that time, and let me tell you: It’s challenging to stay still when the top half of your resting body suddenly plummets to the floor.

If there were a superhero movie about me, and I, Cat, battled villain cats, that night on the trundle bed with the toe cat food would be my origin story. Because, my friends, on that fateful night, I began to fear felines. A few years later, the evil Siamese that attacked my ankles after school when I just wanted to go inside my friend Brad’s house and eat gingerbread cookies smelled my fear. My brother’s cat Nancy hisses because she really is plotting to eat my face off: She just hasn’t made her move yet. The black cat at my friend’s house last night knew I would be powerless when he tried to eat my carrots and ranch dip, so I let him, shaking in terror on the inside.

Irony is sharing a name with something you most fear in life. I guess it could be worse, though. I could be called Airport Bathroom.

Thanks for a fabulous guest post Cat! I did wonder how you came up with the name Dumptruck for Sean's dog - it's such an unusual name for a dog LOL. As you can probably tell from my blog header I love cats, I do know that they have a special ability for sensing people's fear of them though. It's funny how cats are always drawn to people who are either scared or allergic to them!

Don't forget to check out the rest of the stops on the blog tour and drop back later today to read my full review of The Originals.