Review: The Stillness of You - Julie Bale 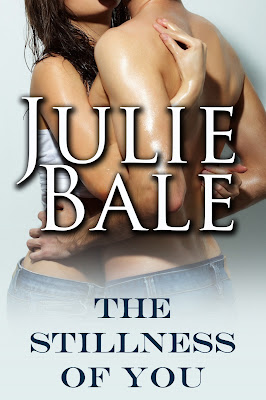 Bad girl,Georgia King, is trying to survive after spiralling into a darkness that nearly took her life. With her college dreams on hold she's trying to get healthy--trying to still the craziness inside her. She has no room for someone like Ben Lancaster and if he was smart he'd stay away. Because everyone knows Georgia is bad news--she ruins people--and if Ben isn't careful, he'll be next in line.

Ben Lancaster is a young, hot shot hockey player on his way to the top. Newly signed to the Philadelphia Flyers, he's living the dream. The girls. The money. The fame. He thought he had everything he wanted until he met Georgia. Suddenly he wants more--he wants her. He'll do whatever it takes to get her and Ben Lancaster always gets what he wants.

But the girl who's different from anyone he's ever known is hiding secrets. And as the dog days of summer pass, only time will tell if Georgia's secrets can be healed. Or if her bruised soul is strong enough to resist Ben Lancaster...

"Ben Lancaster had just tattooed himself onto my soul and the thing about tattoos? They’re painful to remove."--Georgia King.

Beautifully Damaged Series:
The Stillness of You
The Chaos in Me (Release date to be confirmed)

Review:
The Stillness of You is a fantastic contemporary romance that helps to challenge your perceptions of mental illness and the stigma surrounding it. I don't think I've ever read a story where the main character is bipolar before and that's one of the things I liked most about this book. I have a relative who is bipolar and Georgia reminded me of her in so many ways, it actually gave me a deeper understanding of how my cousin must feel at times and I think it's a great way to raise awareness of the problems people with bipolar face. Mental health problems tend to be something that we shy away from talking about so I think anything that gets people thinking / talking about them is a good thing.

Georgia was on a very destructive path, she drank too much, took drugs and slept around just to try and cope with the way she was feeling but nothing helped and she ended up attempting suicide. After spending six months in hospital where she was diagnosed as bipolar she is now living with her brother Matt and trying to put her life back together. She feels like she is balancing on a knife edge and knows it won't take much to push her over the edge and back into the darkness. With the help of Matt and her councillor she is slowly learning how to control her condition but the last thing she is looking for is love. I have to say that I loved Georgia, she may be flawed but she was an incredibly real character and one it is impossible not to connect with and feel for. My heart broke learning more about her past and she is so deserving of a happy ending that I couldn't wait to see her get one.

Ben is a hockey player newly signed to play with the team Matt coaches. Matt had offered him a place to stay to help him relocate but he hadn't realised he would have Georgia staying with him when he made the offer. The attraction between Ben and Georgia is instant, Ben wants to get to know this beautiful girl who draws him like no other but Georgia knows just how dangerous that would be. She is worried that if she has another episode she'll end up hurting Ben so she tries to keep him at arms length. Ben doesn't know why Georgia keeps her distance emotionally and is determined to get under her skin. He is patient, kind and loving and the more she gets to know him the harder Georgia finds him to resist. She is terrified though, what could a rising star like Ben possibly see in someone as messed up as she is? If she trusts him with her deepest, darkest secrets and he walks away she knows she would be devastated. Ben is the perfect swoon worthy guy, he has a great body but he is also such a nice person, someone who may be rich and famous but who has his feet firmly on the ground and isn't interested in the women who throw themselves at him.

The story is told from both Georgia and Ben's point of view which allows us to really get to know each character. We see how scared Georgia is of losing him and we see how much it hurts Ben that she keeps pushing him away. There were times I was practically screaming at Georgia to be honest with him but at the same time I could understand why she was so reluctant, she wants so badly to put the past behind her and she is terrified that she might end up having another breakdown. The chemistry between them is insanely hot but it takes time to develop into love which made their romance is utterly compelling to read about. I'm going to say now that while the ending wasn't what I was expecting it was absolutely perfect, it gives such a fantastic message to people and I really wish I could quote some of the things Georgia says without giving spoilers because they are the kind of words that everyone needs to hear. I'm so happy that a sequel, The Chaos in Me, is due to be released sometime this year. That book is going to jump straight to the top of my to read pile when it is released because I want to see Georgia take control of her condition and I want to see her and Ben have a happy ending together.

The Stillness in You is a sweet, super sexy romance between a damaged girl and the guy who just wants to love her. It's a story that will make you think, one that will challenge you, that will suck you in from the very beginning and one that I'd highly recommend reading.