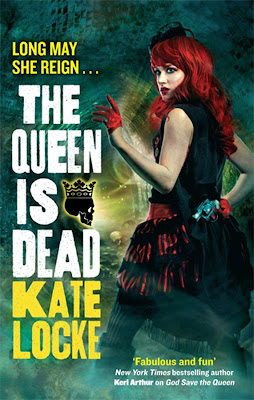 Xandra Vardan is the newly crowned Goblin Queen of England, But her complicated life is by no means over.

There are the political factions vying for her favour, and she's under the all-too-close scrutiny of Queen Victoria, who for some reason wants her head. Not to mention her werewolf boyfriend with demands of his own, and a mother hell-bent on destroying the monarchy. Now she's the suspect in a murder investigation - and Xandra barely knows which way is up.

What she does know is that nothing lasts forever - and immortality isn't all it's cracked up to be.

Review:
God Save the Queen was a fantastic start to Kate Locke's alternate history urban fantasy series so I've been looking forward to getting my hands on The Queen is Dead ever since I first read it. If the stunning covers for this series aren't enough to convince you to read them then the mash up of genres should be, throw in a hint of steampunk, vampires, werewolves and a heroine who has just found out she is the goblin queen and you're definitely onto a winner! Everything I loved about the first book was back again in this 2nd instalment and it's left me desperate to read Long Live the Queen when it publishes in November.

Xandra had quite a shock at the end of the last book when she discovered that she is in fact a goblin rather than the halvie that she always thought she was. The goblins are the most ferocious of the supernatural races and the ones who are most feared by the rest of the population. She has always thought of them as monsters so her world view has taken quite a battering thanks to her newly acquired status as their queen. Not only is she questioning herself and worrying over her new abilities but she also finds that she has become a political pawn that each of the different factions all want to win into their corner, she is going to have to pick her allies wisely though or she'll just end up in an even bigger mess. After everything that Xandra went through in the first book to protect her siblings I have to say I was a bit disappointed in them for abandoning her when she needed their support in return, it's just a good job she had Vex to lean on. Of course the fact that they have been ignoring her for the last few months doesn't stop Xandra diving straight into the investigation when she discovers that her brother Val is missing no matter how much trouble it might get her into. She is the kind of girl who will protect her loved ones at any cost and I can't fault her for that.

I love the way things have developed between Xandra and Vex and I think she sums up my feelings for him perfectly when she says "One of the things I adored about him was he didn't go all chest-thumping on me and treat me like a delicate flower. I knew he'd rip apart anyone who tried to hurt me, but he'd give me first crack at it." I love the fact that although he is an alpha he doesn't try to take charge of every situation. He is supportive and protective of her without being smothering and I like the way he is so calm and centred while Xandra is struggling to come to terms with the revelations of her heritage. Vex obviously loves Xandra for who she is and he is the only one who has always been there for her when she needed him.

Another thing I really enjoyed was getting to learn more about the goblins, we get to see a different side to them as Xandra reluctantly spends more time with the plague and I've come to really like the goblin prince. There have also been a few interesting developments with Vex's werewolf pack and it will be interesting to see how that plays out in the next book. I'm thoroughly enjoying this series and I'm sure anyone who enjoyed the first book is going to love this instalment just as much. I can't wait to see what happens next!

Source: Received from Chrissie at Once Upon a Series in exchange for an honest review (this review will also appear as a guest post on Chrissie's blog).