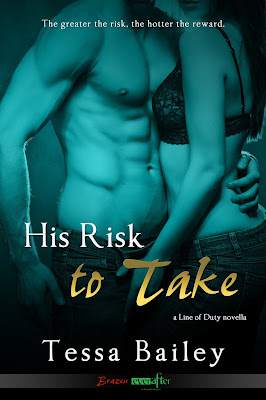 The greater the risk, the hotter the reward?

Homicide cop Troy Bennett had a reputation on the Chicago PD for being fearless and in control - until the night his daredevil partner is killed during a raid. From that moment on, he swears he'll never again be responsible for the loss of a loved one. To escape his demons, Troy transfers to the NYPD, bringing him up close and personal with Ruby Elliott, a beautiful, street-savvy pool hustler.

Reckless and stubbornly independent, Ruby embodies everything Troy's avoiding, but when she walks into O'Hanlon's Pub and blows his carefully laid plans to hell, Troy knows he has to have her risks be damned. But there's a connection between Ruby's shadowed past and a case Troy's working involving a notorious Brooklyn felon, throwing her safety into jeopardy. Confronted with his biggest fear, will Troy push Ruby away to keep her safe or fight to keep her in his arms where she belongs?

Review:
Troy is a Homicide Detective who has just transferred from Chicago to the NYPD for a fresh start after his partner was killed during a raid that went wrong. He first meets professional pool hustler Ruby at a bar and although she is the last person he should get involved with there is something about her that he finds irresistible. Ruby grew up around the criminal underground but is working hard to put her past behind her and build a future for herself. Past experience has told her that the only person she can rely on is herself so it isn't easy for her to put her trust in Troy, especially when her past catches up with them thanks to a case that he is currently working on. Can Troy keep Ruby safe without risking both his case and his career?

I enjoyed the first book in Tessa Bailey's Line of Duty series (Protecting What's His) so I've been looking forward to getting my hands on the sequel His Risk to Take. This author is certainly proving that she has a knack for writing sexy, alpha heroes who are incredibly dominant, possessive and love talking dirty both in and out of the bedroom. If you thought that Derek was a dirty talker in the first book you've not seen anything yet and you're absolutely going to LOVE Troy in this one! As much as I liked Derek I did feel there were times when he crossed the line and took his behaviour a little too far so I was pleased to see that wasn't the case with Troy. I have to say I fell for Troy big time, he had just the right amount of arrogance and I loved the way he took what he wanted and didn't make any apologies for who he was. As alpha has he was I was pleased that even when he wanted to protect Ruby he accepted her wishes and let her deal with things in her own way.

I liked Ruby for her sassy attitude and her independence, I also had to admire the way she was trying to make something of herself and walk away from the life she had been brought up in. She is a caring woman who has never had many friends or people that she can rely on which makes her very protective to the few that she has let into her inner circle. There was one point where she did something so stupid I almost wanted to strangle her but I could see why she made the choices she did even if I didn't agree with them. This is a fairly short story (around 160 pages) so the relationship between Ruby and Troy does develop fairly quickly but that didn't reduce my enjoyment and I loved reading about their passionate affair.

I did have one issue with the time line though, certain events didn't quite add up (I can't say more without giving spoilers) and that pulled me out of the story a little but apart from that His Risk to Take was a fun and sexy read. If you love dirty talk then this is a series you won't want to miss and I'm looking forward to reading more from Tessa Bailey in the future! 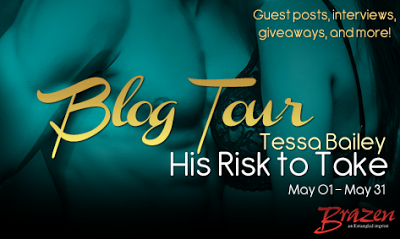 As part of the blog tour I'm excited to offer one of my followers an ebook copy of His Risk to Take thanks to Entangled Publishing.
a Rafflecopter giveaway