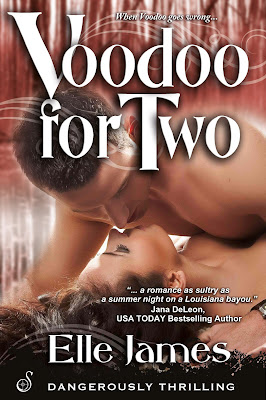 Be careful what you wish for…

Determined to marry the most eligible bachelor in the parish to save her family, Lucie LeBieu turns a “love bug” loose to cast its Voodoo spell. What she doesn’t count on is hitting two targets—the golden boy congressional candidate, and her Cajun-hot ex. To set things right, she must undo the spell before she falls into bed—-and back in love—with a certain down and dirty heartbreakin' cop.

Undercover investigator Ben Boyette is back in Louisiana on special assignment when he runs across his old flame, brewing up trouble as usual. But when hometown threats turn deadly, Lucie's life is on the line. Determined to protect both her and his politician assignment from falling victim to a murderer, Ben finds that he's the one who's falling hard...for the irresistible bayou temptress.

Review:
Lucie will do anything to help her family, even if it means marrying a guy she doesn't love so that she can help her grandmother financially. Eric is a wealthy politician who can not only help her family but who would also be Lucie's ticket out of the Bayou and into the life she's always wanted. Determined to catch the eligible bachelor Lucie turns to voodoo to make sure she wins his heart. Unfortunately for her she isn't very good at casting spells and her love bug ends up on the loose causing chaos in the bayou. Things are complicated further by the return of her ex boyfriend Ben, it has been 7 years since she last saw him but she can't deny the attraction that still simmers between them. Lucie must decide whether to follow her head and marry Eric or to entrust her heart to Ben for a second time.

I really enjoyed the first book in this series so I jumped at the chance of reading Voodoo for Two when I was offered a review copy by Entangled Publishing. This was a fun and light hearted romance that is full of humour and hot chemistry but I have to admit I didn't enjoy it quite as much as Voodoo on the Bayou. Having said that this was still an enjoyable read and I'm definitely planning on reading the next instalment (Deja Voodoo) when it is published in June.

I think the main reason I didn't enjoy this quite as much is that I wasn't a huge fan of Lucie. I could understand her motivations for wanting to marry Eric but when she started to realise that she still had feelings for Ben I was annoyed that she kept playing Eric along for so long. I just felt she started to come across as really selfish when she was saying to herself that Eric deserved someone who actually loved him but then decided to carry on with her plans anyway. It also seemed like she was messing Ben around and neither of the guys deserved that. When she finally made up her mind to break the spell I started to like her again though and by the end she had redeemed herself. I absolutely loved Ben though, he was one sexy Cajun with a bad boy smile and a heart of gold. He had his heart broken by Lucie years ago but he knows that there is something special between them and he sets out to prove it to her.

Alongside the romance you have the antics of Lucie's love bug which were quite amusing to watch and I enjoyed getting to spend time with some of the other crazy bayou characters. I have to say I was slightly disappointed in the latest development between the previous couple Craig and Elaine and I really hope that gets addressed in the next instalment. One of my favourite characters in this story was Lucie's best friend Alex (who also happens to be Ben's sister), she was often the voice of reason and wasn't afraid to tell Lucie exactly what she thought of her plans. I would really like to see Alex get her own story and I'd quite like to see Eric get a happy ending of his own because they both deserve it, I'm not sure if I picture them together though so I guess I'll just have to wait and see who the author has lined up for the next book. If you're looking for a fun series full of magic and mayhem then I'm sure you'll enjoy these stories. I know I'll be reading more from Elle James in the future.