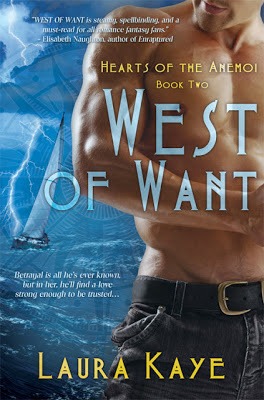 Betrayal is all he's ever known, but in her, he'll find a love strong enough to be trusted...

When Marcella Raines' twin brother dies, she honors his request to be buried at sea, never expecting the violent storm that swamps her boat. Though she's gravely injured--and still emotionally damaged from her recent divorce--Ella fights to survive.

Zephyros Martius is the Supreme God of the West Wind and Spring, but being the strongest Anemoi hasn't protected him from betrayal and loss. Worse, he's sure his brother Eurus is behind it. When Zeph's heartbreak whips up a storm that shipwrecks a human, his guilt forces him to save her.

Ella is drawn to the vulnerability Zeph hides beneath his otherworldly masculinity and ancient blue eyes. And her honesty, empathy, and unique, calming influence leave Zeph wanting...everything. When Eurus threatens Ella, she and Zeph struggle to let go of the past, defend their future, and embrace what they most want--a love that can be trusted.

Review:
Things haven't been easy for Ella, her parents are dead and she found out her husband was a lying cheat but it was the death of her twin brother that really tipped her over the edge. Ella may be grief stricken but her losses have just made her even more determined to live her life to the fullest, particularly to make her brother proud of her. She wants to honour his memory by scattering his ashes at sea like he'd always wanted but caught in a sudden and vicious storm she soon finds herself fighting to survive. Zeph is the supreme god of the west wind and the guardian of spring. When his emotions get the better of him he accidentally causes the storm that nearly costs Ella her life. Realising what he has done Zeph is overcome with guilt and manages to get her to safety but he finds himself unable to leave her side until he knows she is going to be OK.

Since I first read North of Need last year I have become a huge fan of Laura Kaye and I am slowly working my way through the rest of her stories. With the upcoming release of the 3rd book in this series it really was about time I picked up West of Want though and I'm so glad I did. I am such a huge fan of Owen (from the first book) that I knew Zeph was going to have a hard time winning me over but he managed to give Owen a run for his money and he has stolen a little piece of my heart.

One of the things I love most about this series is that the heroes aren't just your typical alpha guys who are so common in paranormal romance. Now I do love an alpha hero but it makes a nice change to read about men who are a little more sensitive and less possessive and controlling. Zeph has suffered a lot of betrayal throughout his life so he has shut himself away and tries to keep his emotions locked inside. As the god of spring he has a huge respect for life though and he loves to make the season blossom. He is drawn to Ella's fighting spirit and he feels guilty for causing her harm but he is wary of trusting her and letting her in because he knows from past experience that is just asking to get his heart broken. Zeph is the kind of guy that fights love but when he falls he falls hard and he gives his all to the person he is with. There was one point when he makes a very big mistake but I was able to forgive him for that because of the hurt he was feeling, apart from that he was pretty much a perfect guy - romantic, caring and oh so sexy!

Ella has been through so much that it would have been easy for her to let the grief take over and give up on life. She is a fighter though and no matter how hard she gets knocked down she gets back up even more determined to win. When she first meets Zeph he turns her world upside down with the revelations about his abilities. She isn't sure what to think but she wants to take the chance to get to know him better. After the betrayal she suffered from her ex husband she is understandable wary, especially knowing that she can't give Zeph the one thing he needs, but her feelings are so strong that she pushes through her fears to take a chance on love. The connection between them is incredibly strong and they have such fantastic chemistry, I think this story was even hotter than the first book!

This instalment to the Hearts of Anemoi series gives us a lot more background into the gods and really builds on the mythology we started to learn in the first book. I loved getting to see a glimpse of how things are going with Owen (he always makes me smile when he appears on the page - particularly when he has ice cream in his hands!) and getting to learn more about Zeph's brothers Boreas (Owen's father), Chrys and Eurus. Eurus is a real nasty piece of work who causes all sorts of trouble for Zeph but I found myself really liking Chrys and I'm very excited to read his story in South of Surrender. This is a great series that I'm sure paranormal romance fans will love, Laura Kaye writes characters who have such heart that you can't help but fall in love with them.