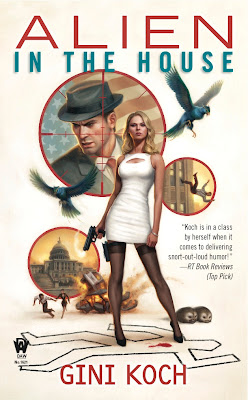 Jeff and Kitty Katt-Martini have learned the ins and outs of Washington politics, not to mention how to prevail in intergalactic war and foil dangerous plots. But, in the aftermath of Operation Destruction, the Gower girls' powers are burned out, the entire A-C population has been "outed" as the aliens living on Earth that they are, and, worst of all, ACE is nowhere to be found.

Then murder and mayhem are served up at an important dinner party at the American Centaurion Embassy, and when the dust settles, Alpha Team and the Diplomatic Corps have more problems than just a dead Congressman.

Is there a single criminal mastermind - or multiple enemies - behind all the conspiracies that want Kitty dead and the A-Cs gone or co-opted to become the War Division?

The return of the best assassins in the business, the reappearance of two individuals long-presumed dead, Agent Malcolm Buchanan felled by something no one can identify or cure, and new technology that can block even the most powerful empath on Earth . . . all this means the game's officially afoot. Then Vance Beaumont comes to Kitty with a wild theory that someone is systematically killing off the House of Representatives . . .

It's up to Kitty and the rest of the gang to find out what's really going on and why. But will they be able to stop the killer or killers before the rest of the U.S. House of Representatives become casualties? And will the replacement Representative for New Mexico's 2nd District, who happens to be Jeff Martini, be the next to die?

Review:
I'm going to start this review by telling you that this is a series that needs to be read in order, it is one of my all time favourite series though and it is well worth picking up a copy of Touched by an Alien if you haven't come across it yet. While this review won't contain spoilers for Alien in the House it will contain information about previous books so I wouldn't recommend reading further unless you have read up to Alien vs. Alien.

Just when Kitty and Jeff are settling into their roles as Diplomats things are all set to change again when Jeff takes on a completely new job. Becoming the Representative for New Mexico wasn't exactly his life goal though, especially when the last 2 candidates were murdered and it looks like he is next on the hit list. Jeff isn't the only target though and there have been multiple deaths in Washington over the last few months, each has been made to look like natural causes but the sheer number of bodies is too high to be a coincidence. It is up to Kitty to figure out why each of them were targeted and who is behind their deaths. Is it an anti A-C plot or is something deeper going on?

I'm a huge fan of this series, it's one of my favourites and I Kitty and Jeff are one of my most loved fictional couples. I love the humour that Gini Koch infuses throughout these books and there hasn't been an instalment yet that hasn't had me laughing out loud as I was reading it. The series has changed somewhat over the last couple of books with the focus more on politics than on the gang fighting superbeings like they did in the earlier stories but that doesn't mean that there isn't plenty of action. Kitty always manages to get herself right in the middle of things and Alien in the House isn't an exception to that, the stakes are higher than ever before and she isn't going to make it through without losing some friends and allies along the way. Nobody is safe and Kitty makes some surprising discoveries along the way, what with the appearance of both old friends and enemies previously presumed dead it is hard to know who she can trust.

I have to admit that I was a bit worried when Kitty and Jeff first took the jobs as Diplomats, I was worried that the series would become boring to read and I'll confess that there are times when I miss seeing Kitty out kicking butt with airborne and the rest of her team but there is always way too much going on for me to be bored for even a single second. Kitty and Jeff may not be leading the fight against superbeings but we still see plenty of the faces that we know and love and it is great to see how they are all getting on. I love spending time with Kitty and Jeff but it's also nice to see so many other characters developing their own relationships as the series continues. The series now has so many familiar faces that I do sometimes end up having trouble keeping all the names straight in my head but it doesn't take long to be pulled back into this world each time I pick up a new book. I might have to start writing myself a character list though just to help me remember how everyone is linked together, particularly as we now have more characters hooking up and joining to become one huge family.

Alien in the House has a few heartbreaking moments, ones where I was close to tears seeing what Kitty has to deal with, but it is also chocked full of humour and I chuckled all the time as I was reading it. The story has even more twists and shocking revelations than I've come to expect from the series and although some of our questions have been answered things have been very nicely set up to carry on into the next book. I absolutely can't wait to get my hands on Alien Research to see Kitty and Jeff both settling into their new roles hopefully uncover who is behind the latest plots against the A-Cs. I just can't get enough of these books and I hope this is a series that will continue for a long time to come.