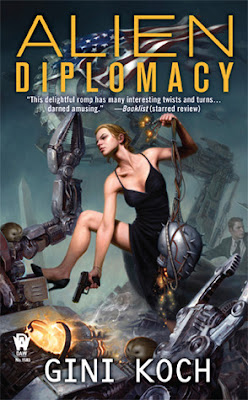 Being newlyweds and new parents is challenging enough. But nothing's ever easy for Jeff and Kitty Katt-Martini, particularly not when they have to switch from being super-being exterminators and Commanders in Centaurion Division to mastering the political landscape as the new heads of American Centaurion's Diplomatic Corps.

Kitty's brand of diplomacy and lobbying isn't quite as smooth as Jeff's - Washington parties, lobbyists of all stripes, and politicians from all states and countries present challenges a well-stocked iPod and quirky sense of humour aren't always up to handling. But when a shadowy assassination plot and a new set of anti-alien conspirators are identified, Kitty's the diplomat for the job - in between "Mommy and Me," "Diplomacy for Beginners," and the dreaded "Washington Wife" classes.

As explosions, assassination attempts, and murders pile up, the question shifts from "who's the target" to "will we all survive to see next week"?

Armed with only their wits, and dressed to kill, it's up to Kitty and the Diplomatic Corps to stop the bad guys from unleashing mayhem on all the world's leaders. But will Kitty trust the right people, at the right times, or will going her own way prove deadly - not just to her, but to her daughter, Jamie?

Review:
It's all change for the Alpha team since Kitty gave birth to her baby daughter. With Jeff, Kitty and Christopher now working in Washington heading up the American Centaurion Diplomatic Corps it has left Reader, Gower and the others to take over the role of hunting down the super-beings. Kitty has never been the most diplomatic character so her new job doesn't come naturally - in fact she has been signed up to multiple classes just to learn how to behave around the other ambassadors. Luckily Jeff is coping a little better but no matter which way you look at it the transition isn't going smoothly. Throw in an assassination attempt, Washington politics and the usual plots against the AC's and they're going to be in for a bumpy ride.

It's no secret that I'm a massive fan girl when it comes to this series - I can't get enough of Kitty, Jeff and the Alpha Centaurion crew! I love the humour, the snark, the action and the romance not to mention all the hot men - both the alien and human ones. I love the way Kitty has built up such a loyal team of men and women, the banter between the various human and alien agencies and the way they all work together to battle the big bad fuglies. Without a doubt this is one of my favourite series and one that I can't recommend highly enough.

It pains me to say it but I didn't enjoy Alien Diplomacy quite as much as the first four books. Don't get me wrong, it's still an awesome read and a must for any fan of the series, it just didn't quite live up to my (admittedly high) expectations. I don't think it helped that it has been a few months since I read Alien Proliferation, when a series has as many characters as this one does it can be hard to remember exactly who everyone is - especially the more minor players. It didn't take me too long to settle back into Kitty's world and I enjoyed the fact that some of the people we have met previously now have a more important role to play but I have to confess to finding myself confused by the number of new characters. I kept finding myself having to backtrack to figure out who was who, especially when it came to members of Kitty's Washington Wives class and their respective spouses.

I also found having Kitty and the team based in Washington was a big change of pace, particularly in the earlier part of the book where everyone is trying to settle into their new roles and figure out how things work in the world of the diplomats. The action really picked up in the second half of the book but I missed watching Kitty and Jeff out battling super-beings. The plot was still incredibly complex though, if you've read any of this series then you'll already know that Gini Koch is an expert at weaving multiple layers into her books. I don't think I've ever read a series as complex as this one and I never manage to fully figure out all of the plots that are going on. Alien Diplomacy is no exception and as usual Kitty and the gang have to put together the clues to figure out how many different factions they are up against this time around.

Please don't be put off by the fact that this isn't my favourite book in the series. These books are still outstanding and they're ones I have and will continue to recommend heartily. I have already pre-ordered my copy of Alien vs. Alien and I can't wait to get my hands on my next Jeff and Kitty fix!