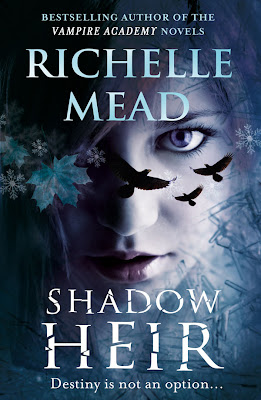 The Otherworld, a mystic land inextricably linked to our own - and balanced precariously on one woman's desperate courage . . .

Shaman-for-hire Eugenie Markham strives to keep the mortal realm safe from trespassing entities. But as the Thorn Land's prophecy-haunted queen, there's no refuge for her and her soon-to-be-born children when a mysterious blight begins to devastate the Otherworld . . .

The spell-driven source of the blight isn't the only challenge to Eugenie's instincts. Fairy king Dorian is sacrificing everything to help, but Eugenie can't trust the synergy drawing them back together. The uneasy truce between her and her shape-shifter ex-lover Kiyo is endangered by secrets he can't - or won't - reveal. And as a formidable force rises to threaten the human world, Eugenie must use her own cursed fate as a weapon - and risk the ultimate sacrifice . . .

Review:
Shadow Heir is the fourth and final book in the Dark Swan series so this review will contain spoilers for the previous three books - if you haven't started the series yet you probably want to stop reading now! I'm a massive fan of Richelle Mead, I love her Georgina Kincaid series and her Vampire Academy books make up one of my favourite YA series. I really liked the first couple of books in the Dark Swan series but felt disappointed with Eugenie in the last book, Iron Crowned, I was irritated by her refusal to accept her duties to the Thorn land and the way she let her people suffer because of that. I was also extremely annoyed with the way she kept running back and forth between Dorian and Kiyo! So I'll admit that I was nervous before I picked up Shadow Heir, particularly after reading the blurb and seeing a mention of a truce between her and Kiyo - he tried to kill her and their unborn children in the last book so I couldn't see how there could possibly be any kind of truce between them!

Shadow Heir picks up the story a few months after Iron Crowned ends, Eugenie is five months pregnant, Kiyo and Maiwenn are still determined that her son needs to die before he can fulfil the prophecy about him and Dorian is protecting her as he promised to do but Eugenie is unsure if she can completely trust him after his previous betrayal. I can't really go into any more detail than that without giving spoilers so I'll just say that I was surprised at a couple of places where Richelle Mead took the story.

Since the last book I haven't been Eugenie's biggest fan, I've found her actions to be selfish and I think she has made some incredibly stupid decisions. I'm sad to say that this continued to be the trend in this book. Although I could understand why she made some of the choices she did because she was trying to protect her children I felt that she didn't think things through properly. She could have saved herself a lot of trouble if she had just trusted Dorian but then again he has done some pretty horrible things in the past so I was never particularly his biggest fan either. He did grow on me a lot in this book though and I think he is now my favourite character in the series. I don't think Eugenie deserves him though, especially after her actions at the end of the book (I can't say more because I don't want to give spoilers but I'm sure anyone who has read the book will know what I mean).

I spent most of the book wanting to punch Kiyo and was really surprised that Eugenie didn't take more of a stand against him and Maiwenn. His actions were despicable in the last book and he made no attempt to apologise in this one. I'm annoyed that he never really got what he deserved and I couldn't understand why he continued to support Maiwenn even after the things he admitted near the end of the book. The plot was quite slow moving during the first half of the book during the final months of Eugenie's pregnancy. I did enjoy reading about her reactions to the babies when they were born but that just made her actions after that point even harder to understand. There were two major twists that should have shocked the heck out of me but unfortunately I'd figured them both out in advance so they didn't have the expected wow factor.

Overall I find myself extremely disappointed with the way this series ended, if this hadn't been the last book or if we knew a spin off series was planned then I think I'd have felt more forgiving but we are left with so many questions and I just didn't find Eugenie's actions even slightly believable. I still love Richelle Mead as an author and will look forward to trying her next adult series but in all honesty I don't think I could recommend this series when it ended on such a low note. I would happily recommend her Georgina Kincaid series though or her Vampire Academy books for YA fans.