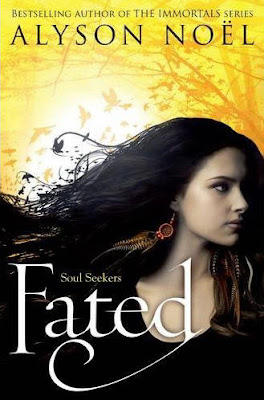 Strange things have been happening to Daire Santos. Animals follow her, crows mock her, and glowing people appear from nowhere. Worried that Daire's having a breakdown, her mother sends her to stay with the grandmother she's never met, who lives on the dusty plains of Enchantment, New Mexico. There Daire crosses paths with Dace, a gorgeous guy with unearthly blue eyes.

Her grandmother recognises Daire's episodes for what they are - a call to her true destiny as a Soul Seeker, a person who can navigate between the living and the dead. Guided by her grandmother, Daire must be quick to learn how to harness her powers, because Dace's brother is an evil shape-shifter out to steal them.

Daire must embrace her fate as a Soul Seeker and discover whether Dace is the guy she's meant to be with . . . or if he's allied with the enemy she's destined to destroy.

Review:
Daire has spent her life travelling the world with her mother who works as a make-up artist on various movie sets. She has never had somewhere to call home and has to start all over again every time they head off to a new destination. As she approaches her sixteenth birthday she starts suffering with strange visions and worries that she is losing her mind. When the doctors want to institutionalise her Daire's mother sends her to live with Paloma, the grandmother she has never met, as a last resort. Paloma may not have been in Daire's life as she was growing up but she claims to know why she is having these visions and promises to help her control them.

I have to confess that I've only read the first book in Alyson Noel's Immortals series, it is a series I want to continue but I just haven't had time to finish it yet. I couldn't resist Fated though - it sounded completely different to anything else I've been reading recently and I was intrigued by the idea of finding out more about Native American culture, shamans and spirit animals. I wasn't disappointed and Fated is a great start to this new series and it is one I'm looking forward to continuing.

When we are introduced to Daire she is living the high life in Morocco out on a date with the popular young heart throb from the movie her mother is working on. She seems just like any other sixteen year old until the terrifying visions start and she becomes hysterical. She has no explanation for the things that are happening to her which just makes it all the more frightening and she genuinely fears she is losing her mind. She never met her father's family, he died before she was born and her grandmother disappeared shortly after his death and hadn't been heard from since. When Paloma contacts her mother out of the blue Daire is horrified at the idea of going to live with a complete stranger in some small town in the middle of the desert. She resents her mother for sending her there but deep down she knows there is no other alternative unless she wants to be admitted to hospital.

As Daire gradually gets to know Paloma she finally realises what it is like to have a place that she can consider her home. She even starts to make some friends and gets to attend a proper school for the first time which is something she only ever dreamed of before. At first her grandmother's talk of spirit guides, magic and Soul Seekers just makes Daire raise her eyebrows and wonder if crazy runs in the family but she soon starts to realise that there is truth to what Paloma is saying. Daire starts to learn to control her abilities and as a reader you are taken on a fascinating journey with her into the spirit realm.

Fated moves at a good pace, the story is full of magic and mythology and there is the beginning of a promising romance that I'm looking forward to seeing more of. This is definitely a series I'm keen to continue and one I'd recommend to anyone looking for something a bit different in the YA paranormal genre. I can't wait to see what happens to Daire next!