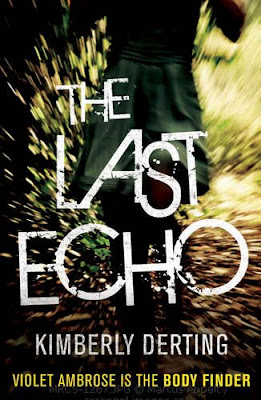 IN THE BEGINNING
Violet's morbid ability to sense echoes from the dead led her to uncover dark murders and long-buried secrets. The only people she told were her supportive parents and boyfriend Jay.

NOW SHE CAN FINALLY BE HONEST
Violet hopes that working with a special investigative team will give her the chance to actually save lives - or at least catch more killers. But the instant connection she feels with mysterious partner, Rafe, is both confusing and unsettling, and their unique bond creates tension with Jay.

IN THE END, ALL THAT'S LEFT IS AN ECHO
When she discovers the body of a student murdered by 'the collector', Violet is determined to solve the case. With her own relationship on the line, Violet doesn't realise that the serial killer is looking to add to his collection, and that she may have caught his eye.

Will the next life Violet has to save be her own?

The Body Finder Series:
The Body Finder
Desires of the Dead
The Last Echo
There will be a fourth book in this series but the title and release date are currently unknown

Review:
The Body Finder was one of my favourite books of 2010 and I have been a fan of Kimberly Derting and this series ever since I read it. It shouldn't come as any surprise to hear that I have been eagerly waiting for this book since I read Desires of the Dead last year. Considering the lengthy wait and my high expectations it would have been easy to end up disappointed but I'm happy to say that The Last Echo completely blew me away and was by far my favourite instalment to the series so far! Kimberly Derting hit the ball right out of the park with this one and I have no idea how I'll survive the wait until the final book of the series next year!

As The Last Echo is the third book in the body finder series I'm going to assume that anyone reading this review will already have read the first two books. Therefore this will include spoilers for the previous books but will remain spoiler free for The Last Echo - don't say I didn't warn you if you choose to carry on reading!

Violet has been through a lot since we first met her, she has helped track down several murderers and almost been killed in the process. She has seen more dead bodies than anyone would ever want to see - especially considering she is only 17 years old - and she has been recruited by an FBI agent to work on a special psychic task force. Yes, it has definitely been an interesting year for Vi! Luckily she has a supportive boyfriend Jay who has always known about her abilities and her family are there to stand by her. On the downside she is about to face her toughest adversary yet and things will never be the same again.

Violet has always kept her abilities a secret so it is strange for her to be working with her new team and she finds it hard to trust them at first. I really enjoyed getting to find out more about Sara and Rafe along with meeting other team members Krystal, Sam and Gemma. They all have slightly different abilities and I'm enjoying discovering just what they are capable of. Violet feels guilty that her powers are only useful after a murder has been committed, her ability to sense the echo left behind on both the killer and the body doesn't offer much help trying to stop a crime from being committed in the first place. Some of the others are able to sense things before they happen and Violet wants to find a way to use her gift to stop future murders. Their latest case against a serial killer dubbed as "the collector" isn't going to be easy though and he has his sights set on collecting one of their own.

I found myself slightly frustrated that we don't get to see more of Jay in this book, I absolutely love him and think he and Violet are made for each other. He has always been such a good friend to her and he is incredibly romantic, the kind of boyfriend any girl would want to have! I was pleased to see that most of the time they are together things are going better between them than they were in the last book though. While I like Rafe as a character and desperately want to know more about his abilities I am frustrated that Violet seems so drawn to him and I really hope that she doesn't end up ditching Jay. I can see why Violet feels able to share things with Rafe that she is wary of talking to Jay about but considering how Jay has been there for her for so many years I think he understands her better than she understands herself! I think I'm just a little bit fed up with the whole love triangle thing as it seems to be occurring in almost every YA series I read. At least it isn't done too heavy handedly in these books though.

What I love most about this series is the mystery. Kimberly Derting always includes short chapters from the killer's perspective and while they are always creepy I think she outdid herself this time around. Scenes in The Last Echo

Source: Received for review from Headline in exchange for an honest review