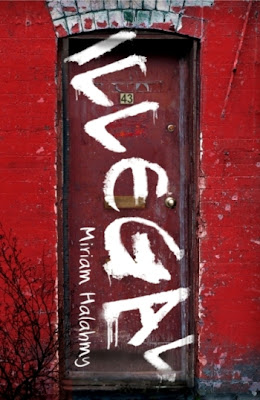 If Jemma had lived, none of this would have happened. I'd have been too busy to get dragged into this filthy, illegal business . . .

Since Lindy's baby sister died, her family have been caught in a downward spiral. Her brothers are in prison and her parents have given up. Soon Lindy is out of her depth too, caught in the centre of an international drugs ring, with no way out. Then Lindy finds help from an unexpected ally: weird, mute Karl from school, and together they plan a daring and desperate escape. But when you're in this deep, can you ever be free?

Touching, surprising and painfully honest, Illegal is the second in a cycle of three novels by Miriam Halahmy, and the follow up to her acclaimed first novel, Hidden.

Review:
Ever since Jemma died Lindy's family has been falling apart - her mum has lost her job and started drinking, her dad spends his time gambling away the little money they have and her older brothers are both in the young offenders institute. Lindy is trying to hold things together for her younger brother Sean but quickly finds herself in deep trouble. Offered a job by her cousin she sees it as a lifeline but soon ends up caught in an international drugs ring completely unable to see a way out. Sometimes help comes from the most unlikely sources though and when she befriends the school outcast, a mute boy called Karl, she begins to feel hopeful that she might escape.

Illegal is the second book in Miriam Halahmy's series set on Hayling Island but each of these books can be read as a stand alone novel as there is no cross over of story lines. I haven't read the first book Hidden yet but I enjoyed Illegal so much that I'm definitely planning on picking it up soon and I will look forward to reading Stuffed when it is released next year.

Illegal touches on some difficult topics from poverty, neglect and grief through to the drugs trade that brings Lindy into contact with some pretty shady characters. These subjects are tackled with realism and sensitivity though and show just how easy it is for someone to be drawn into something without realising how far reaching the consequences will be. Lindy comes from a problem family and nobody has ever expected much from her, after the death of her baby sister everything gets much worse but Lindy falls through the cracks and doesn't have anyone on her side to help her. She gets pulled into her cousin's world of dodgy deals and drugs because she is trying to earn some money for food for herself and her younger brother Sean. What she really wants is to study hard and train to become a paramedic but her circumstances force her into a different direction. It is so easy to feel sorry for Lindy but you have to admire her too, not for the trouble that she has got herself into but for her determination to find a way out.

I loved the relationship between Lindy and Sean, you can see how much he looks up to his older sister and the way he worries for her is really sweet. She does what she can to protect him even though he annoys her like any younger sibling often does. They are both devastated by the loss of Jemma but also from the loss of their older brothers to the young offenders institute. Garth in particular has always looked out for the pair of them and Lindy feels as if he has abandoned her when she needs him the most. It was hard to have sympathy for Garth as I felt he was old enough to know better than do what he did but he was also struggling with his grief and from the lack of proper parental supervision and he did the best he could in the circumstances. At first I felt like he'd set Lindy up but he comes through for her in the end and you get to see how much he really cares for her. The whole Bellows family are crying out for help and you just end up wishing they'd been given it sooner.

Karl was another great character, he has also suffered the loss of someone who he cares about so he understands what Lindy is going through. Their backgrounds may be very different but there is a connection between them and they each help the other learn how to cope. Karl's way of dealing with things has always been to shut others out, he lost the ability to speak and stopped communicating with anyone at school or home. It takes Lindy's fierce attitude to bring him out of his shell and I enjoyed seeing the changes in both of them as they get to know each other better. Theirs is a sweet relationship and one that gives them both a lot of comfort.

Illegal is at times a heart wrenching read but it is a book I would highly recommend. It may even make you think differently about that annoying family that lives down the road and is always causing trouble - what happened in their lives to make them behave that way? This may be the first book I've read by Miriam Halahmy but it definitely won't be the last and I'm looking forward to continuing this series.

Source: Received from Meadowside Fiction in exchange for an honest review