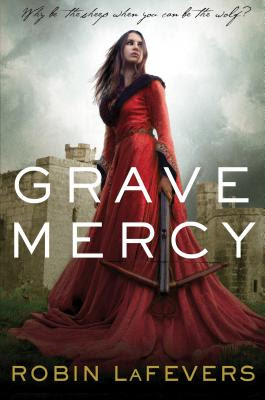 Why be the sheep, when you can be the wolf?

Seventeen-year-old Ismae escapes from the brutality of an arranged marriage into the sanctuary of the convent of St. Mortain, where the sisters still serve the gods of old. Here she learns that the god of Death Himself has blessed her with dangerous gifts—and a violent destiny. If she chooses to stay at the convent, she will be trained as an assassin and serve as a handmaiden to Death. To claim her new life, she must destroy the lives of others.

Ismae’s most important assignment takes her straight into the high court of Brittany—where she finds herself woefully under prepared—not only for the deadly games of intrigue and treason, but for the impossible choices she must make. For how can she deliver Death’s vengeance upon a target who, against her will, has stolen her heart?

Review:
Grave Mercy is the first book in Robin LaFevers' new historical fantasy series and a book I'd highly recommend to fans of Maria V. Snyder's Touch of Power. Ismae has suffered from prejudice and abuse her whole life - starting with her mother's attempt to abort her before she was even born. The poison used by her mother left her scarred and marked her as Death's daughter, her father never forgave her for being born and after years of abuse he forced her into an arranged marriage when she was just 14. After suffering a brutal beating on her wedding night Ismae is rescued by the local herb witch and taken to the convent of St Mortain. Mortain is the god of Death and the nuns at the convent train as his handmaidens to become assassins.

Ismae is an easy character to love, she starts the story with a very low self image, lacking in confidence and believing that she is worthless and unwanted. She feels powerless in a world where men get to control women's destinies and it isn't until she arrives at the convent that she starts to realise that she can change her future. As the nuns train her with weapons and in the art of poison and she starts to uncover her previously hidden abilities Ismae grows as a person and becomes a confident, powerful and kick ass young woman. It is easy to see how she comes to blindly trust in the nuns who gave her her freedom and why she believes they have her best interests at heart. When she is assigned to go to court to protect the Duchess Anne she starts to realise that the orders from the convent aren't always the best way to serve her god. It is at that point that we really get to see her become a woman and begin to follow her destiny. Ismae has the courage to go against orders from the people she believes saved her because she has the intelligence to figure things out for herself.

I can't write this review without mentioning the wonderful slow-build romance between Ismae and Gavriel Duval. These characters start off with very good reasons to mistrust each other - they don't like each other much either! - but both of them are sworn to protect the Duchess and they finally realise that they are on the same side and start to work together. Trust slowly turns to friendship and eventually becomes something more and it was beautiful to watch. Duval and Ismae really are made for each other and I hope we get to see a lot more of them both as the series continues. I was a little disappointed when I first found out that the second book Dark Triumph will be told from Sybella's point of view - I'm going to miss Ismae - but the more I think about it the more I actually like the idea. I've been intrigued by Sybella since we first met her and I think that Ismae and Duval's part of the story has come to a natural conclusion so it will be interesting to see what part Sybella has to play.

This story is full of mystery and political intrigue that had me turning the pages as fast as I could. This feels more like a historical book with slight fantasy elements than a full on fantasy novel although I don't know enough about the time period to know how historically accurate it is. Either way it was a thoroughly enjoyable read and I can't wait to get my hands on the sequel. I am very curious to see how things play out for Anne and her subjects and I highly recommend this series to both historical and fantasy fans.

Source: Received from the publisher via Netgalley in exchange for an honest review, I also received a print copy from Andersen Press.