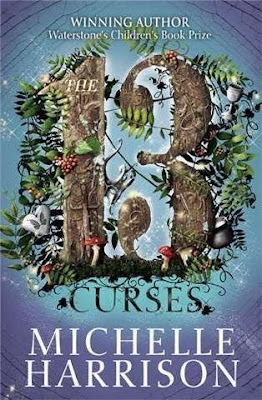 When fairies stole her brother, Red vowed to get him back.

Trapped in the fairy realm, Red must beg an audience with the fairy court. There, she strikes a bargain. Her brother will be returned - but only if she can find the charms of Tanya's bracelet scattered in the human world.

Returning to Elvesden Manor, Red is assisted by Tanya and Fabian, and a desperate hunt begins. Soon they make a shocking discovery. The charms are now cursed with the twisted qualities of the thirteen treasures they represent . . . and the longer they are missing, the worse the consequences will be.

Can Red, Tanya and Fabian find all the charms? And even if they do, will the fairies keep their promise?

Thirteen Treasures Trilogy:
One Wish
The 13 Treasures
The 13 Curses
The 13 Secrets

Review:
After Red sacrificed herself to save Tanya at the end of The 13 Treasures she is now trapped in the fairy realm. She is determined to use the opportunity to continue the search for her missing brother so she can finally bring him home. When Warwick ends up caught in a fairy ring and taken to the fairy realm himself they both find themselves trapped by the Hedgewitch. Working together to escape they eventually make it to the court where Red agrees to accept a task in order to have her brother returned to her. She must find the 13 charms from Tanya's bracelet and Warwick will be held captive by the fairies until she returns. After enlisting the help of Tanya and Fabian Red begins her search but can they track down the charms before they cause damage in the human realm thanks to the curses the fairies have put on them?

I have to admit that I'm not usually a big fan of books about fairies, they tend to be my least favourite paranormal creature so I'm wary about picking up books about them. Having said that I really enjoyed the first book in Michelle Harrison's Thirteen Treasures series so I was looking forward to finding out what happened next. I don't read a lot of children's literature but this is a fun series and one that I think will be extremely popular with younger children.

I enjoyed the chance to find out more about Warwick's past and what happened to Fabian's mother and it was great to get to see a bit of the Seelie and Unseelie courts when Red goes to them to make her appeal. The fairies in this series are devious and darker than you find in some other books and I actually prefer them that way. You definitely wouldn't want to cross paths with these fairies! It is interesting to see the ways that Tanya, Red and the others have of avoiding notice from the fairies - for example by wearing their clothes inside out or dressing in red to name a couple of them.

I hate to say it but I found that this story dragged a little which is something that surprised me compared to the first book. Although there is some action in the first half of the book as they are captured by the Hedgewitch I felt it was quite slow moving. The main part of the quest doesn't start until around page 300 and then I felt they were able to track down the charms a little too easily, I thought it would have been a much harder task. In spite of those minor problems this was still an enjoyable read and the ending has left me very curious to see how the trilogy ends in The 13 Secrets. I would recommend this series to younger readers who enjoy fantasy and fairy stories.

Source: I was given this book by Kirsty from The Overflowing Library