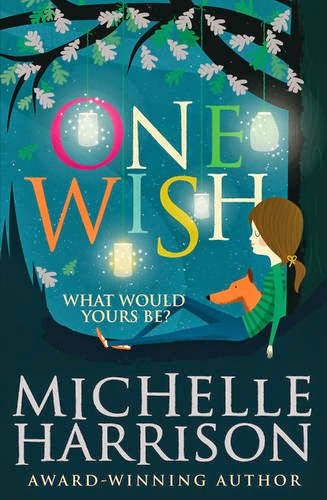 One wish only, understood? There are rules, so listen good . . .

The Spinney Wicket Wishing Tree can grant your heart’s desire – just wish out loud, or hang a message from its branches. It sounds as though the Wishing Tree is just a sweet old tradition, but Tanya is only too aware how real its magic could be.

Tanya can see fairies, and would love to meet someone else can see them too. When she meets Ratty and his cheeky fairy, Turpin, it seems at last she’s found them. But Ratty has a secret, and a dangerous enemy who'll stop at nothing to get to him.

Tanya must use her one wish to save her new friend - but wishes should be used wisely . . .

Thirteen Treasures Trilogy:
One Wish
The 13 Treasures
The 13 Curses
The 13 Secrets

Review:
One Wish is a new prequel story for Michelle Harrison's Thirteen Treasures series so it's ideal for fans of the series or anyone who is new to this author. This whole series has been incredibly fun to read and One Wish is no exception to that, it has all the magic and wonder you could hope for from a fairytale and is full of great characters and fun adventures.

Tanya is a young girl with the second sight which allows her to see the fairies and other fae creatures. This rare ability often gets her in trouble, the fairies don't like to be seen and they take great pleasure in tormenting her by causing mischief and because Tanya's mother can't see them it is always Tanya who gets the blame for the things they do. Tanya is thrilled when she meets a young boy called Ratty and realises that he has the same ability as she does, not only can he see the fairies but he also has ways to protect himself against them and he's willing to teach them to Tanya. When Ratty is kidnapped it is up to Tanya, along with Ratty's mischievous fairy guardian Turpin, to rescue him but that is going to be easier said than done.

One Wish is an incredibly whimsical tale full of colourful characters. My favourite would have to be Turpin, she's such a tricky little pest but her heart is in the right place and she would do anything to protect her Ratty. I also really enjoyed the Wishing Tree who always speaks in rhyme. Tanya is a fabulous main character and I've enjoyed following all of her adventures.