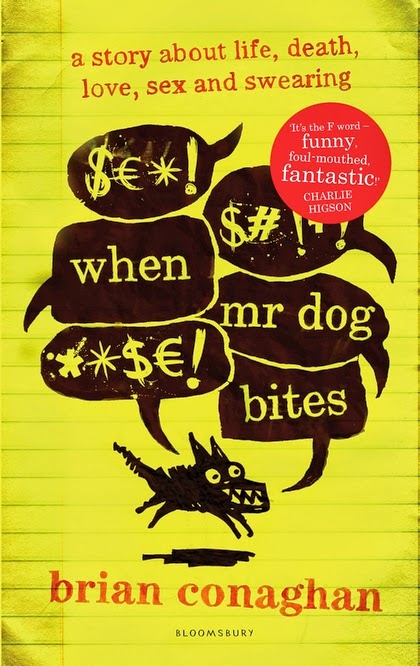 Meet the a-mayonnaise-ing Dylan Mint. He's sixteen and he's got Tourette's. His life is a constant fight to keep the bad stuff in - the words that explode out of his mouth, the tics, the growling, howling dog that tries to escape whenever he gets stressed.

A routine visit to the hospital turns Dylan's whole life topsy-turvy when he discovers that he's going to die next March. It's only August, but still - he has THINGS TO DO. So he makes a list - Cool Things To Do Before I Cack It - and sets out to make his wishes come true . . .

Review:
I wanted to read When Mr. Dog Bites from the moment I heard about it, I couldn't wait to read about a main character who suffered with Tourette's syndrome because it's a condition I know so very little about. I absolutely loved getting inside Dylan's head and seeing first hand what it is like to live with Tourette's.

Dylan is a great character and in most ways he is just a normal sixteen year old teen, he likes hanging out with his best mate Amir and he can't wait to get a girlfriend and have sex for the first time, but he also struggles with anxiety and his nerves tend to show in the form of tics, cursing or even growling noises. The more he tries to suppress his symptoms the stronger the outbursts usually end up being and he's learnt that in most cases it's easier to just let go and accept what is happening. He has developed routines and coping methods to try and reduce the occurrences but they have by no means been eliminated.

I absolutely adored Dylan, he is such a sweetheart and I love him like a younger brother, in fact, if he was real I think I'd want to adopt him! He is one of my favourite characters of the year and that's high praise when I've read well over 100 books already. I enjoyed his friendship with Amir and how realistic their school life was, things weren't easy for them but they were always there for each other. Going to a special school means facing prejudices from the rest of the world along with coping with all the other issues that any other school child comes across. We also get to see a lot of Dylan's family life, coping with an absent father who is away in the army while his mum struggles to make ends meet and then there is the issue of Dylan's impending death to worry about. His "cack it list" was hilarious and the way he goes about achieving his goals adds a lot of humour to the story.

I love that Brian Conagham tackled so many difficult subjects - everything from disabilities, racism, bullying, family issues and just generally growing up - but he did it with humour and sensitivity. This book is jam packed with swearing and slang so if you're easily offended then it's definitely one that should be avoided. However if you're willing to go into it with an open mind, if you can remember what it was like to actually be a teenager and if you want a book that is realistic, honest and 100% true to life then you will adore When Mr. Dog Bites.