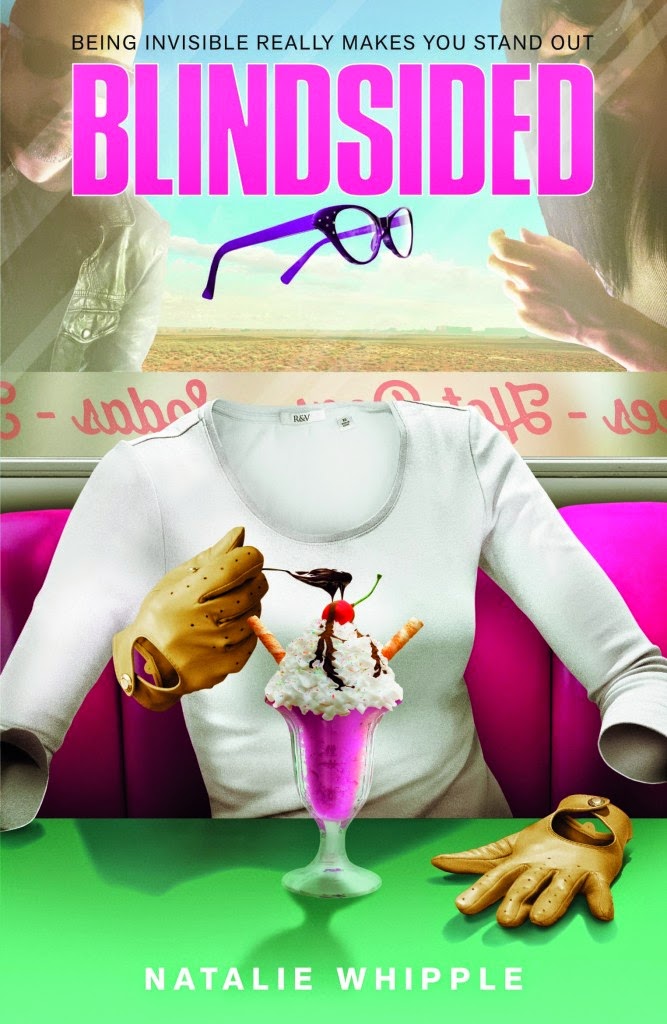 What price would you pay just to look in a mirror?

It's junior year of high school, and Fiona has definitely had enough of being invisible. It's pretty hard to have a normal relationship when the only photos of her and Seth show him kissing thin air.

On top of that, old Arizonan gang tensions are threatening to spill over at any minute, which could put them all in serious danger.

So when Fiona realises that she and her friends know something that could change everything, she has to decide whether working with the criminal syndicates is too high a price to finally be seen.

Review:
I enjoyed reading Transparent so I was looking forward to reading Blindsided. The story picks up three months after Fiona made a deal with her father to keep her family safe from his crime syndicate and she's been enjoying living a normal life with her friends. However, she should have known it was too good to last, especially since she's living inside another syndicate's territory. She was never going to be able to remain hidden forever and now Juan has sent his men after her, convinced that she has information he needs to help him start producing the radiasure drug again. As if it wasn't bad enough having a gang hounding her for information it doesn't take long before the army arrives in town taking over the old radiasure factory and Fiona's school. The army also thinks Fiona is the key to finding the information they need and now she has not just one but two enemies on her trail. The army aren't wanting to create more of the drug though, they're looking for a cure and offering Fiona the one thing she's always dreamed of - a life where she will finally be able to look in a mirror and see her own face. Can Fiona's dreams come true? If so, how much would it cost her?

One of the things I enjoyed most about the first book was the group of friends that Fiona made, they all have useful abilities and they are very protective of each other so it was no surprise that they were willing to stand by her side again. I'd really enjoyed the romance between Fiona and Seth in the first book but I think what I liked most about it was that it didn't take away from the plot. I have to admit I was a little disappointed with the way their relationship was handled in this book. They go from being really close in the first book to alternating between snapping at each other or ignoring each other in this one. They are both so stubborn and childish that it drove me crazy and I wanted to bash their heads together and tell them to just TALK to each other. Their arguments were constantly making their friends uncomfortable and they did the same to me too and I started to skim read sections with the two of them. I wanted to read a book about cool teenagers with superpowers fighting against the criminal syndicates but that side of the story almost took a back seat to the teen angst.

I also found Fiona was much more annoying in this book, she constantly makes stupid decisions because she never thinks anything through and that just puts herself and her friends at risk. OK so she usually manages to get them out of trouble afterwards but that's not such a great thing if she's the one getting them in it in the first place. I could understand why she wanted to find a cure for her invisibility but she was so whinny for the majority of the book that I started to lose all sympathy for her. I think she really just needed to grow up and realise that we can't always have everything we want, sometimes you have to suck it up and do the right thing for everyone else even when it means missing out on something you wanted. She does make some important realisations towards the end of the book so while it was a little too late for this book it does give me hope that she wouldn't irritate me as much in a third book (I have no idea if the author plans to write another or not though so that may be a moot point).

Blindsided wasn't all bad, there is still plenty of action and I did enjoy seeing Fiona and the others take on both Juan's gang and the army. Fiona also starts to make progress with her mum and her brother Graham too which was nice to see. There are a few surprises in store for the gang when they realise that their enemies may be closer than they think but they work together to figure things out. I may not have enjoyed this as much as Transparent but just glancing at the ratings it looks like I'm in the minority there so fans of the series will probably still want to give this one a try. If Natalie Whipple does write a third book then I'd be willing to give the series another go because I do like the world she's created and I think there are a lot of different adventures she could send these characters on.