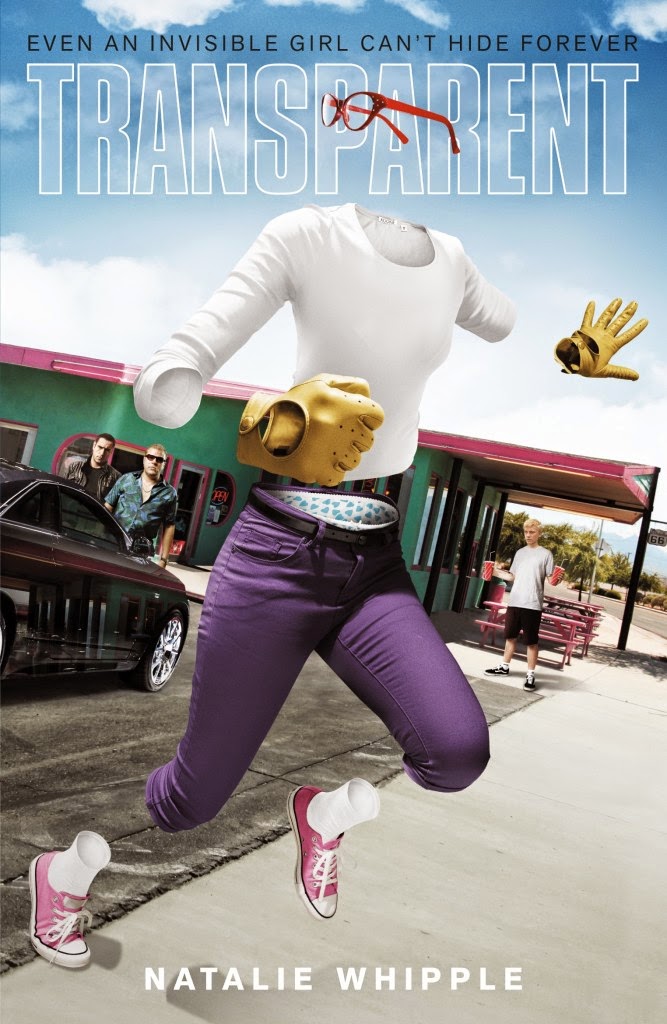 High school is hard when you're invisible.

On the run from her crime lord father, Fiona has to blend in to keep herself, her family and her new friends safe.

But even in a world where everyone has a superpower, being completely transparent means that it's impossible to disappear.

Review:
The minute I heard Transparent described as X-Men crossed with the Godfather I knew I had to read it and in a lot of ways that is a completely accurate description of what I got. This is a fun and fast read that I was able to devour in a couple of hours and as long as you don't take it too seriously it's a really enjoyable read.

Fiona was born in a world where anti-radiation drugs caused all sorts of interesting genetic mutations across the population. Although the drugs are now illegal and very hard to get hold of these mutations have continued into subsequent generations only growing more and more diverse as the years go by. Normal everyday people have abilities that can range anywhere from an unusual skin or eye colour through to super strength, psychic abilities or even the power to fly. In Fiona's case she is completely invisible - the only person in the world born with that ability. In a world where the governments are failing and gangs have taken over control of their territories anyone with a strong ability is in high demand and it's not like they have the option of saying no. Especially when they're the daughter of a mob boss like Fiona.

Her father has exploited her invisibility since she was a child, starting her off on pickpocketing and gradually training her to become a top spy, but that isn't the worst of his plans and now he wants more than she is prepared to give him. Fiona's father has a mutation that makes him irresistible to all women, when he asks them to do something they are powerless to refuse and even Fiona isn't completely immune which makes escaping his clutches incredibly difficult. Fiona and her mother have tried to escape before and failed but they have to make one last desperate attempt before Fiona is forced to cross a line she'll never be able to come back from. They flee from Las Vegas to a remote town in Arizona and can only hope to stay off of her father's radar because if he finds them he'll never give them another opportunity to escape.

I have to say I absolutely loved all the weird and wonderful abilities Natalie Whipple has come up with, every character has a different skill that they bring to the table and I enjoyed seeing all the variations she has come up with. I also enjoyed seeing Fiona go to school for the first time, the author has obviously thought out all the little problems that being invisible would cause and she makes you look at the ability in a new light. As much as it might be fun to be able to turn invisible on command Fiona doesn't have the option of turning her power off, she has never seen what she looks like, she has no idea what colour her hair or eyes are and she is sick of people looking through her or assuming that because they can't see her she isn't a real person with thoughts and feelings just like them. It makes you think about how often you rely on reading someone's facial expression to get an idea what they're really thinking and wonder how hard it would be if you were talking to thin air! I really enjoyed getting to know the group of friends that Fiona makes. Bea, Seth and Brady are all fab and I enjoyed the banter between them and Bea's other brothers. They are a close knit group and they quickly welcome Fiona into their hearts and treat her like a member of the family.

As much as I had a lot of fun reading this novel there were a few things that I disliked. The main one was the way Fiona treated her mother and there were times I wanted to reach into the book and give her a good talking to. Considering Fiona's father is addictive to women and his ability completely robs them of their freewill I was annoyed that Fiona was so hard on her mother for not escaping sooner and for always going back in the past. Fiona tends to either ignore her mother, snap at her or walk out without telling her where she is going, she just generally acts like a little cow and it made me struggle to like her at times which is a shame because I enjoyed seeing her with pretty much every other character. Just once I wanted Fiona to act like a grown up and talk to her mother and I would have really loved to have seen more development in their relationship.

The other issue I had was to do with the way they didn't even make any attempt to hide their identity. If you're on the run from a mob boss the last thing you do is go and enrol at a school using your REAL name. Come on, this guy runs half the country and you seriously don't think he'd be able to run a search on school databases looking for you? She doesn't even attempt to deny that she's related to him when people ask her about it. I do kind of get that as far as the world knows there is only one invisible girl but I do think she would at least have tried to keep her name on the down low. If you can ignore that one issue (which I was able to put aside fairly easily) and go with the flow then Transparent is a really fun read. It's light hearted and has a little of everything - action, humour and a touch of romance. In general I liked most of the characters and I had fun in the world the author has created so I'm very much looking forward to reading the sequel Blindsided.