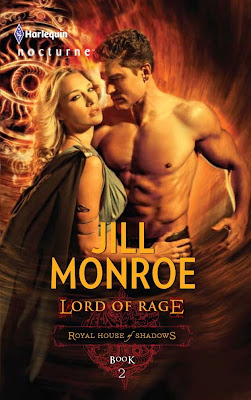 Once upon a time…the Blood Sorcerer vanquished the kingdom of Elden. To save their children, the queen scattered them to safety and the king filled them with vengeance. Only a magical timepiece connects the four royal heirs…and time is running out…

Princess Breena had been dreaming of her warrior lover when she was ripped from her Elden castle and thrown into a strange, dangerous realm. Lost and alone, she prayed for survival and vengeance for her stolen kingdom. She found both in a woodland cottage…in a dark bear of a man.

The golden-haired beauty had eaten his food and slept in his bed when Osborn found her. Though he wanted to awaken his virgin princess to carnal pleasures, Breena wanted more—including his warrior skills. Skills the once-legendary mercenary had long buried. Now Osborn had a choice—risk his life or deny his princess her fairy-tale ending.

Review:
I was really curious about the Royal House of Shadows series, 4 books written by 4 different authors and all based on a different fairytale - whats not to like about that? Especially when one of the authors is Nalini Singh and another is Gena Showalter - both authors who have written books I have enjoyed in the past. I hadn't read anything by Jill Monroe or Jessica Anderson before so I thought this would be a great way to try their work too. Lord of Rage is the second book and Jill Monroe's contribution to the series.

Lord of Rage is based on the tale of Goldilocks and is the tale of Nicolai's younger sister Breena. Raised as a princess Breena always knew it would be her duty to marry a man chosen by her father to make an alliance between kingdoms. Everything changes when Elden comes under attack and her parents are killed by the blood sorcerer. On their death beds the king and queen used the last of their magic to send their 4 children to safety. Breena finds herself alone in the forest - lost, terrified and grieving for her family she is tired and hungry when she stumbles across the isolated cottage that Osborn shares with his brothers Bernt and Torben. Osborn is the last of the Ursan beserkers, his village was destroyed in a vampire attack that only his 2 young brothers survived. After years working as a mercenary to provide for them all Osborn wants now is a quiet life and to eventually get revenge on the vampires that took everything from them. The last thing he needs is a beautiful stranger invading his space, particularly one who has been invading his dreams to share passionate kisses. Breena is determined to trace her brothers and discover what happened to their kingdom and she will do whatever it takes to get Osborn to help her achieve her goals.

I have to admit I wasn't a huge fan of the first book in this series which surprised me because I'm a fan of Gena Showalter. This is the first book that I've read by Jill Monroe so I wasn't too sure what to expect when I picked up Lord of Rage but I found I enjoyed it more than the first book. There seemed to be more humour to the story and I laughed several times while I was reading it. I liked the fact that the comparison to Goldilocks was more obvious and I did find it amusing when Breena steals the beserker's porridge, breaks their chair and falls asleep in his bed!

I wasn't the biggest fan of Breena to begin with though, she comes across as pretty useless and there were several times when she listed her top skill as being good at brushing her hair. Now I know she was a princess who'd led a very sheltered life but I like my heroines to have a bit more spunk to them than that and I was worried she was going to be a complete doormat. She did change quite a bit as Osborn started training her though and I was pleased to see her start to gain confidence and grow up a bit. Osborn was a tortured hero with a difficult past who has spent years focused on getting revenge. I actually loved his brothers more than I loved him but he did grow on me as I got to know him better. I was annoyed by the way he kept pawing at Breena every chance he got but would then push her away and be incredible rude to her though. He seemed to change his mind about what he wanted so often that I was almost left with whiplash! Considering how young and innocent she was supposed to be I also felt that she accepted his attitude and attentions a bit too eagerly.

Overall I enjoyed this more than the first book in the series and I will read on to find out what happened to Breena's other brothers and to see if Nicolai can manage to regain his kingdom but unfortunately I don't think this is a series I'll want to re-read in the future.