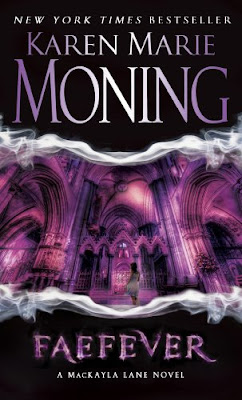 He calls me his Queen of the Night.
I'd die for him. I'd kill for him, too.

When MacKayla Lane receives a page torn from her dead sister's journal, she is stunned by Alina's desperate words. And now MacKayla knows that her sister's killer is close. But evil is closer. And suddenly the sidhe-seer is on the hunt: For answers. For revenge. And for an ancient book of dark magic so evil that it corrupts anyone who touches it.

Mac's quest for the Sinsar Dubh takes her into the mean, shapeshifting streets of Dublin, with a suspicious cop on her tail. Forced into a dangerous triangle of alliance with V'lane, a lethal Fae prince, and Jericho Barrons, a man of deadly secrets, Mac is soon locked in a battle for her body, mind, and soul.

Review:
Faefever is the third book in Karen Marie Moning's Fever series starring Sidhe-Seer MacKayla Lane. The story picks up right after the ending of Bloodfever - Mac is still searching for the Sinsar Dubh (an ancient book that is supposed to contain Fae secrets) although that is proving difficult when getting anywhere near it causes her incredible pain. She is also determined to track down her sister's murderer and figure out who has Alina's missing journal and why they are sending random pages to her. As Samhain approaches and the walls between the Fae and human realms get ever weaker Mac must decide who she can trust to help her stop them falling completely.

This series seems to get more and more addictive with every book I read. The cliffhangers also seem to get worse and worse with every book though so I'm very glad I waited until all 5 books were already available before I started reading them - if I had to wait a whole year for the next book I might have started screaming when I reached the end of Faefever!

This series definitely falls on the darker side of urban fantasy, the things that Mac has been through (and continues to go through) don't always make for comfortable reading. She has grown up a lot since the first book though and you have to admire her for her determination to not just survive but also to protect innocents and to get vengeance for her sister. She has proved to be a lot tougher than I ever thought she would be considering how girlie she was at the start of the series. I do like the fact that she still has that softer side though, the side that likes to dress in pretty clothes and flirt with handsome men - Mac proves that women don't have to act like men all of the time to be kick ass.

I also like the fact that she no longer blindly trusts anyone, given her history with Barrons, V'lane and even her fellow Sidhe-Seers she has learnt to always look for hidden motives in people's actions. Talking of the other characters I still can't get enough of Barrons, yes he can be a bit of a bastard at times but there is still something about him that just leaves you begging for more. I love the intensity of the relationship between him and Mac and although they are keeping me waiting I know they will be an explosive combination when they finally give into their mutual lust! V'lane is another interesting character and one who I find myself liking a little more with each book, I still don't trust him (I don't actually trust Barrons either) but I do think that most of the time he is looking out for Mac's best interests. It was great to see more of Christian MacKeltar, we had met him briefly in the previous book but I'm even more intrigued now I know a bit more about him and his family. Fingers crossed they have a part in the next book too.

I know I had been warned that this series had killer cliffhangers but OMG that was worse than anything I could have expected! Karen Marie Moning managed to shock the heck out of me and has left me desperate to find out what happens next. Thankfully I already have the last two books sitting on my shelves so I'm off to start reading Dreamfever!