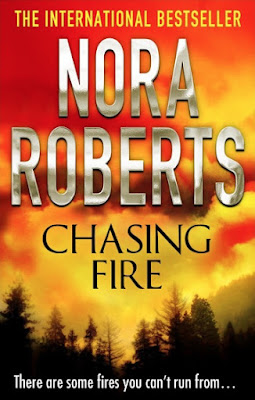 Rowan Tripp is addicted to danger. Ever since she turned eighteen, Rowan has been a 'smoke jumper', fighting back the ferocious forest fires that sweep through the Montana mountains each year. But now Rowan is mourning the death of her good friend and partner, Jim - haunted by the belief that she could have saved him.

Determined to carry on, Rowan throws herself into training the new recruits to the smoke-jumping team - not realising there is a different kind of danger waiting for her. She has always had a strict rule: never get romantically involved with a workmate. But the moment she meets Gull Curry that rule is severely tested. And when it becomes clear that someone blames Rowan for Jim's death,, and is determined to get revenge, Rowan realises this is one fight she can't win on her own . . .

Review:
Rowan is a smoke jumper who spends her summers fighting wildfires in the Montana mountains. She is part of a close team but the death of her jump partner (Jim) last year has left her grief stricken and feeling guilty even though she knows there was nothing she could have done to save him. Gull is a seasoned fire fighter but a rookie jumper who is immediately drawn to Rowan. She has a rule never to mix work and pleasure but he is determined to break through her defences and get her to date him. As the fire season continues it becomes clear that someone blames the smoke jumpers, and Ro in particular, for Jim's death and they are determined to make them pay. Can Ro figure out who is behind the accidents on base before she or Gull pay the ultimate price?

I have a confession to make - as unlikely as this may sound Chasing Fire is actually the first book I've read by Nora Roberts! I've heard so many good things about her writing that I can't believe I've only just got around to giving her a try but I'm sure it won't be long before I pick up more of her work. As the daughter of a fireman I have always had a huge amount of respect for firefighters but living in the UK I never really knew that much about smoke jumpers. I have to say right now that they are something else, kudos to those men and women who put themselves into such dangerous situations to protect the wildlife and rural homes effected by wildfires!

I really enjoyed reading about the smoke jumpers and their way of life, the camaraderie amongst the team was realistic and I loved the banter between them all. The work they do is dangerous and hard and you feel like you're right there alongside them feeling the heat of the blaze and breathing in the smoke fumes as they battle the dragon. Just thinking about what these guys put themselves through physically was enough to leave me feeling exhausted! Like many people who work hard the jumpers also play hard, they use banter and snark as a way of coping with stressful situations and they look out for their own.

Ro has been part of the team for a long time and she is a strong and capable woman who really knows what she is doing when it comes to her job. She is just as tough as the men she works with and has earned their respect, I loved the fact that she isn't looked down on because she is a woman and although there are less females in the crew than men there was no hint of sexism towards them. As much as I respected Ro for her professional abilities I did find myself getting frustrated with her in other ways. She is very immature emotionally, very much a daddy's girl and at times I felt she acted like a spoilt 12 year old which left me wanting to shake her. Gull was a hero it was easy to fall for but I felt he deserved to find someone so much better than Ro. He was sweet and caring, a romantic at heart but also a strong guy who looks out for the people he cares for. I enjoyed the banter between them and I did like seeing him break down Ro's defences and get under her skin. The romance between them built up nicely but I felt it ended a little abruptly - I wanted to see more of how their future played out so would have really appreciated an epilogue to show how they were getting on after the summer season was over.

When it comes to the mystery of who was causing trouble for the jumpers I felt it was a bit too obvious who was the one behind everything. To me it didn't feel like there were many potential suspects which made it far too easy to guess who was the murderer. I also didn't find myself particularly interested in the secondary romance involving Ro's father. All it really did was bring out Ro's childish side which irritated me so much I wanted to throw the book across the room. Overall I loved the book for the smoke jumpers and would love to re-visit the crew again in the future, I'm sure there must be at least a few stories that could be told about the rest of the team! I felt suspense was a little disappointing but I'm still looking forward to reading more by Nora Roberts in the future.