This post is part of the Team #CANDORUK campaign for #INSURGENTUK. Click on the picture above for more information. 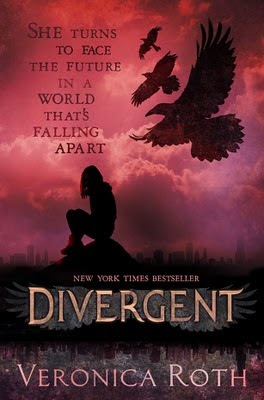 For sixteen-year-old Tris, the world changes in a heartbeat when she is forced to make a terrible choice.  Turning her back on her family, Tris ventures out, alone, determined to find out where she truly belongs.

Shocked by the brutality of her new life, Tris can trust no one.  And yet she is drawn to a boy who seems to both threaten and protect her.  The hardest choices may yet lie ahead . . . .

She turns to face the future in a world that's falling apart.

2nd Read Review:
Divergent was one of my favourite books of 2011 so I had to re-read it in the run up to today's release of the second book in the series Insurgent. I'll warn you now that this is going to be more of a discussion of my feelings rather than a review so it will probably contain spoilers. If you haven't read Divergent yet then you can read my spoiler free review here.

Before I started blogging I would re-read my favourite books over and over again but I now have so many new books to read that I don't seem to have time to do that any more. I have to admit that I was a bit nervous that Divergent wouldn't live up to my memories but I'm pleased to say I loved it just as much the second time around. I was surprised by the amount of things I had forgotten though so I'm really pleased I did read it again before I started on Insurgent.

I went into the story thinking more about the different factions, which one would I choose? Would I survive the initiation process or end up factionless? I think I had more appreciation about how brave Tris was to chose to leave Abnegation and her family behind and start a new life for herself with Dauntless. I like to think Dauntless would be the faction I would chose (for the tattoos and piercings plus the fact that I can be a bit of an adrenaline junkie!) but I have no doubt I would fail the initiation tests miserably and get kicked out! In reality I'd probably end up with whatever faction I had been born into. I knew the Dauntless initiation was harsh but I'd forgotten quite how brutal it was, Veronica Roth really doesn't hold back on the violence and uses it to highlight just how harsh Tris's world has become.

I didn't really talk about the romance much in my first review but I have to say I love Four. What I like most is that this isn't a case of instant love, they get to know each other slowly as the story progresses and gradually develop feelings for each other. I love the way Four pushes Tris, he knows how strong she is and forces her to see past her self imposed limits. He believes in her even more than she believes in herself and because of that she grows even stronger. I like the way we get to see Four's more vulnerable side, he isn't afraid to let Tris see his fears and I find him a more realistic hero because of that. Bravery isn't about having no fear, it is about feeling the fear but not letting it stop you and that is something that both Tris and Four show over and over again.

The plot was superb and I absolutely loved the battle at the end - I really don't know how I managed to survive the year long wait to read Insurgent so I'm very happy that I now have my hands on a copy. Despite the fact that I have now read a lot more YA dystopia than I had last year Divergent is still up there as one of the best and it is a book I have recommended again and again since I read it. I can't wait to find out what happens next!

Other reviews of this book: If you have reviewed this book on your blog please leave a link to your review in the comments & I'll add the link here.