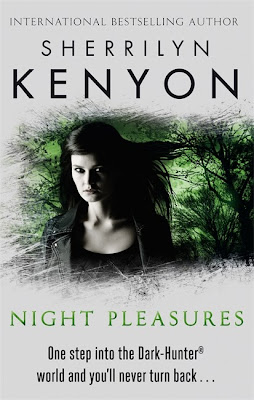 Amanda Devereaux has a unique family. Her mother and older siblings are witches and psychics, and her twin sister is a vampire hunter. All Amanda wants is a quiet, normal life, but when she finds herself the target of an attack meant for her twin, she wakes to find herself handcuffed to a sexy, blond stranger.

Kyrian of Thrace is a Dark-Hunter: an immortal warrior who has traded his soul for one moment of vengeance upon his enemies. He spends his eternal days hunting the vampires and Daimons that prey upon mankind, and he is currently on the hunt for a very old and deadly Daimon named Desiderius who has deemed it sport to handcuff Kyrian to a human while he hunts him. Now Kyrian and Amanda must find a way to break their bond before they give in to their dangerous attraction to one another. Or before Desiderius kills them both.

Review:
Kyrian, warrior prince of Thrace, gave up his soul to become a Dark-Hunter after suffering the ultimate betrayal by the love of his life - his wife Theone. He has spent the last 2,000 years protecting humans from the vampires that prey on them but has never fully recovered from his broken heart. Amanda has eight older sisters including a psychic, a vampire hunter and a voodoo priestess but has never really felt like she fits in with her flamboyant, paranormal loving family. All she wants is to settle down with a normal man and have a quiet family life. When she wakes up handcuffed to Kyrian she gets a lot more than she bargained for and starts to realise that perhaps all things paranormal aren't quite as bad as she thought they were.

The Dark-Hunter series is another one that I started ages ago but never got around to continuing. I loved the first book Fantasy Lover so it was about time I picked up Night Pleasures and luckily it didn't disappoint. I have a feeling that Sherrilyn Kenyon is going to be quickly added to my favourite authors list and this is already shaping up to become a favourite series! The story has everything I look for in a paranormal romance - interesting mythology, a good selection of believable characters, an engaging plot with a nice amount of action but most of all a hot romance with a likeable heroine and a hero you can fall for.

I liked Kyrian when I "met" him in Infinity (the first book in Sherrilyn Kenyon's spin off YA series) so it was nice to actually get the chance to find out more about him. Learning about his past you can see he was a brave and proud warrior who worked hard to protect his people from the Romans. It was heartbreaking to find out about the way his wife betrayed him, he gave up everything for her and she threw it all back in his face. It's no wonder he is wary of trusting anyone again! Considering everything he has been through he could have turned into a bitter and uncaring man but he hasn't - he acts as a father figure to Nick, cares for his housekeeper and fellow Dark-Hunters and immediately puts himself in danger to protect Amanda and her family.

Amanda always thought she was the normal one amongst her crazy family, her mother and sisters are all involved in the supernatural community while she is a plain old accountant. We'd actually already met one of her sisters in Fantasy Lover (Selena) so it was nice to catch up with a familiar face and I enjoyed the interactions between all of the sisters. I'm keeping my fingers crossed we'll see more of them as the series continues. All Amanda ever wanted was a quiet life that didn't involve anything paranormal but after meeting Kyrian she starts to wonder if a normal life would be quite what it's cracked up to be. I loved the romance between these two, there is fab banter between and they have great chemistry. The love scenes are sensual, romantic and hot which is just what I'd expect after reading the first book. It was great to catch up with Julian and Grace too and find out how they are getting on a year or so on from the ending of their book.

If you're one of the few people who is yet to discover this series then I'd definitely recommend it to paranormal romance fans. I love the Greek mythology, the unusual take on vampires and daimons, and Sherrilyn Kenyon has a writing style that sucks you in and makes you not want to leave. I can't wait to get started on Night Embrace!