Review: Dark Side of the Moon - Sherrilyn Kenyon 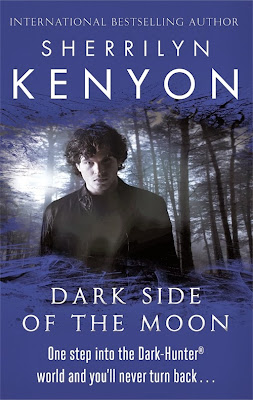 Susan Michaels is a reporter on a mission to resurrect her professional reputation. And she only has to brave her cat allergy at a local animal shelter to follow the lead that could get her off the tabloid beat for ever. But she gets more than she bargained for when she inadvertently adopts one of the cats . . .

As soon as she gets home the cat turns into a gorgeous naked man. Ravyn is entirely unique - a Were-Hunter who became a Dark-Hunter as well. Suddenly Susan is pulled into Ravyn's mysterious world - one full of danger and magic. And despite the way he makes her sneeze, despite the danger that swirls around him, she just can't resist him . . .

Review:
Susan is a down on her luck reporter whose reputation is in ruins after a major scandal and the only job she could find is working for a paper that covers all the weird and supernatural stories that people only read for fun. She's desperate to get back to investigative journalism and if she can just find one really big story she has a shot at rebuilding her career. When a lead takes her to the animal shelter her best friend runs she suddenly finds herself the new owner of a cat she is allergic to and under suspicion of murder. If that wasn't bad enough the cat turns out to be a Were-Hunter and she couldn't be more shocked when he takes human form and tells her she's in danger. Now she's in a whole world of trouble facing dangerous enemies but with Ravyn at her side she might just survive.

I'm such a huge fan of Sherrilyn Kenyon and her Dark-Hunters series, she never fails to add something new to her stories or take things in unexpected directions and that's something I love about these books. The sheer scale of this world is incredibly impressive and I have no idea how she manages to keep all of the characters and ongoing story lines straight in her head. I'm sure I've still barely scratched the surface and I can't wait to carry on reading!

There is so much going on in Dark Side of the Moon but I never felt that Susan and Ravyn's romance took a back seat and I really enjoyed seeing their relationship develop. I liked the fact that things seemed to move slower between them, it takes time for them to trust each other and to build a rapport but considering how many new things Susan was having thrown at her I felt that made things much more believable. There is plenty of fun banter between them and all the humour I've come to expect from the series, it's hilarious that Susan is allergic to Ravyn's inner cat and that even his human hair can set her off sneezing. Ravyn's back story is heart breaking, that isn't really anything new for the Dark-Hunters but I think it was made worse in his case by the way his family treat him. He blames himself for a dreadful event that wasn't really his fault but what's worse is that his father and brothers blame him too and I hated seeing the way they acted towards him. What I loved was seeing Susan stand up for her man and put his family firmly in their place, she helps Ravyn see that there was nothing he could have done to prevent the tragedy. Susan and Ravyn make a great couple, they both fight for what they want and they're strong in different ways which makes them perfect back up for each other.

I don't even know where to start when it comes to what is happening in the rest of the Dark-Hunter world during this book. Of course I absolutely adore Ash as always but there are some absolutely shocking things going on with the Daimons and that epilogue almost made my jaw hit the floor. Honestly what the hell is Nick thinking? I love his character (I'm very invested in him since I started the Chronicles of Nick series before I started the Dark-Hunter one) and my heart has broken for him over certain events that have happened but I was completely shocked and horrified at his actions here. I know he's hurting but I'm annoyed that he's letting other people influence him and turn him into the something he never wanted to be. I definitely can't wait to read The Dream-Hunter so I can find out what happens next though, I have a feeling things are about to get incredibly interesting!