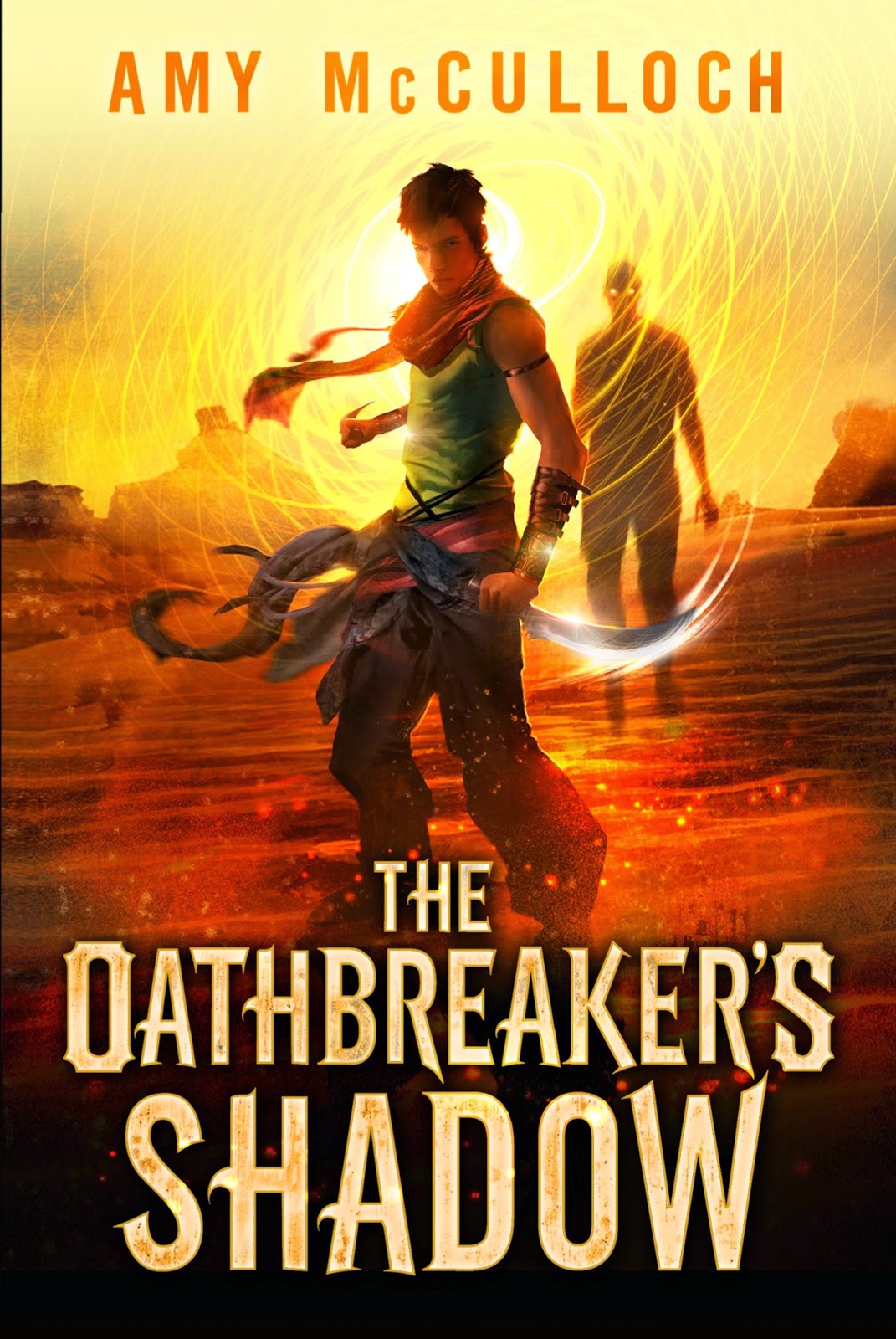 Fifteen-year-old Raim lives in a world where you tie a knot for every promise that you make. Break that promise and you are scarred for life, and cast out into the desert.

Raim has worn a simple knot around his wrist for as long as he can remember. No one knows where it came from, and which promise of his it symbolises, but he barely thinks about it at all—not since becoming the most promising young fighter ever to train for the elite Yun guard. But on the most important day of his life, when he binds his life to his best friend (and future king) Khareh, the string bursts into flames and sears a dark mark into his skin.

Scarred now as an oath-breaker, Raim has two options: run, or be killed.

The Knots Sequence:
The Oathbreaker's Shadow
The Shadow's Curse

Review:
Amy McCulloch has created a very interesting world where promises made have much higher consequences than we are used to. Promises are made by tying knots and if your break your word you are not only scarred for life but also followed around by a shadow that shows the whole world you are an oathbreaker. Oathbreaker's are ostracised by the rest of society and forced out into the desert alone as exiles. If they manage to survive the journey there is one place they can go but they will never be allowed to return to their friends or family again.

Raim has had a knot tied to his wrist for as long as he can remember but he has no knowledge of the promise that was made for him to receive it. Whatever it was the promise was made well before he came of age though so he is sure that nothing will come of it. All of his life Raim has wanted to become an elite soldier and join the Yun, he has trained continuously and now that he is about to turn 16 he must face the final challenge to be accepted as one of their warriors. When Raim makes a special promise to his best friend, prince Khareh, it causes the unthinkable - the knot on his wrist bursts into flames and the scars that form show the world that Raim is an oathbreaker. He only has two choices: stay and risk execution or run in the hope of finding a way to clear his name.

I really enjoyed the world building, Amy McCulloch has such a descriptive writing style that I could almost see events playing out in front of my eyes like I was watching a movie. You almost feel the heat of the desert and Raim's desperation as he is forced to leave everything he has ever known behind him. As much as I loved the world I do think there were times when the story was bogged down in so much detail that the plot suffered for it. The story is quite slow because of this and there were times when I just wanted something exciting to happen. Considering how much information we are actually given about the world I'm surprised by how many questions I still have and how confused I am by certain aspects of the broken promises and sage magic. I'm hoping that things will start to make more sense when I read the sequel though.

I felt it was a little too easy to guess who was going to be the "bad guy" of the story, I had a very bad feeling about that particular character from the moment we met them and I was actually disappointed when my feelings were proved correct. I'm still not convinced by how quickly they were able to seize power though, it's hard to say too much without giving spoilers but I think because so much of their story happened off centre stage I didn't feel very connected to what had happened with them.

I really liked Raim's character and enjoyed seeing him come to terms with what had happened to him. He is very determined to find a way to clear his name so that he can go back home and take up his position as Khareh's protector and continue is Yun training. I also really liked Wadi, it's nice to come across strong female characters who are capable of standing up for themselves and it's quite clear that Raim needed her help to survive in the desert.

Although I had a few issues with The Oathbreaker's Shadow it is still an enjoyable story, just a little slower paced than I expected it to be. Be warned that it does have a killer cliffhanger ending though and if I'm honest there is very little resolution to anything at the end of this book so it really feels like one very large book that has been split into two. This would have really annoyed me if I'd read this book a year ago but since the sequel, The Shadow's Curse, is already available it isn't the end of the world.