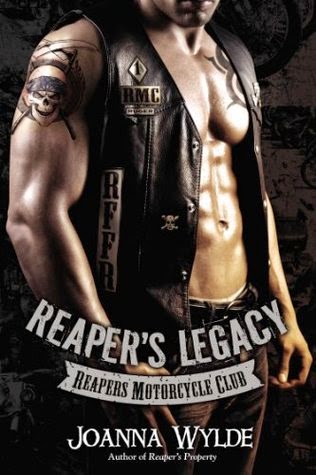 Eight years ago, Sophie gave her heart-and her virginity-to Zach Barrett on a night that couldn't have been less romantic or more embarrassing. Zach's step-brother, a steely-muscled, tattooed biker named Ruger, caught them in the act, getting a peep show of Sophie he's never forgotten.

She may have lost her dignity that fateful night, but Sophie also gained something precious-her son Noah. Unfortunately, Zach's a deadbeat dad, leaving Ruger to be Noah's only male role model. When he discovers Sophie and his nephew living in near poverty, Ruger takes matters into his own hands-with the help of the Reapers Motorcycle Club-to give them a better life.

Living with outlaw bikers wasn't Sophie's plan for her son, but Ruger isn't giving her a choice. He'll be there for Noah, whether she wants him or not. But Sophie does want him, has always wanted him. Now she'll learn that taking a biker to bed can get a girl dirty in every way.

Review:
I have a confession to make, MC (Motorcycle Club) stories are a bit of a guilty pleasure of mine and I love Joanna Wylde's Reapers MC series. These stories aren't traditional hearts and flowers romances, they're dark, gritty and often disturbing. The men are alphas to the extreme and live outside the normal rules of society. Women fall into two categories - sweet butts who are hangers on who are basically fair game for any of the club members to do what they want with or old ladies who are pretty much the property of one of the MC members. The men have no respect for the sweet butts but the old ladies are well protected and cared for and any of the guys will put their lives on the line to keep them safe. It's a misogynistic society and one that I REALLY wouldn't want to live in but I find it incredibly fascinating to read about.

Sophie knows very little about MC life, the only connection she has to the Reapers is that one of the members, Ruger, is the uncle of her eight year old son, Noah. Sophie always had the biggest crush on Ruger but it was his step-brother, Zach, that she met first and foolishly gave her heart to. Zach was an abusive partner and a deadbeat dad who has had no contact with Noah in years. Sophie struggles to support herself and her son financially but although Ruger has offered to help her in the past he had no idea just how bad things were for her until one night when she finds herself in over her head. It is Noah who calls Ruger for help and now he's realised exactly what is going on he is determined to get his nephew to safety.

I love that Sophie was more willing to stand up for herself than Marie was in the previous book. Sophie has had enough of men walking all over her and she isn't about to let Ruger take control of her life no matter how hot she finds him. Ruger wants Sophie and Noah in his life, he wants to take care of them both and he wants to be able to act on the attraction that sizzles between him and Sophie but he isn't prepared to make her any promises and feels like he should be allowed to see other women too. Sophie knows she deserves better than that, she is wary of the MC lifestyle for a start but she's definitely not prepared to sit back and let Ruger sleep around on her. She'd rather be on her own than let that happen and I was so pleased to see her stand her ground on that issue. I also enjoyed seeing her get to know the other old ladies and realising how strong the friendship was between them. The old ladies rally around and offer her advice on how to get what she wants from Ruger and I really enjoyed the camaraderie between them all.

Ruger is out of his depth when it comes to Sophie. He is used to being in control and for women falling over backwards just to be with him. He's never really had to fight for what he wants before but Sophie and Noah are worth it and he is forced to reassess his own life to decide what is really important. I loved the interactions between Rugar and Noah, he is so patient and caring towards his nephew and a great father figure for him. You know without a doubt that Ruger would do anything to protect his family and Sophie and Noah are the centre of his world. Of course it doesn't hurt that Ruger is hot as hell and he's definitely a skilled dirty talker.

Reaper's Legacy isn't just about their romance though, trouble was brewing between the Reapers and rival gang the Devil's Jacks in the first book and it escalates even further in this book. There is plenty of action to keep you on the edge of your seat and Joanna Wylde has really set things up to get even more interesting in the third book Devil's Game. I can't wait to read Em's story!