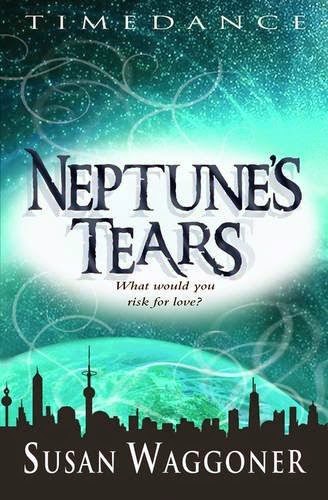 It's 2218 and Zee McAdams is in her second year as a healing empath at a busy London hospital. When a mysterious young man becomes her patient, Zee's hard-won calm is pierced. Her attraction is complicated by the fact that David Sutton is an alien, a group whose presence - and purpose - on Earth is deeply mistrusted. When London and other cities experience a wave of anarchist attacks, Zee and David are brought even closer together. The more time Zee spends with David, the more she likes him - and the more questions she has. Even as their relationship deepens, Zee knows that David is still hiding something from her.

Will Zee have the courage to follow her heart, no matter where it takes her?

A remarkably gripping novel about star-crossed love and future life.

Review:
Neptune's Tears is the start of Susan Waggoner's Timedance series which is set 200 years into the future. Zee is training as an empath and working at a London hospital where she helps patients heal using her abilities. She loves her job and enjoys helping people so the last thing she is looking for is a relationship, especially when falling in love could have a devastating effect on her powers. She meets David when he is injured and under her care in the hospital, although it is forbidden for her to get involved with a patient she finds herself unable to forget him even when he has been released to return home. As their paths keep crossing they fall naturally into a relationship but there is more than one obstacle in their path. The main one being that David is an alien and he is only on Earth for a limited time before he will have to return to his home world and leave Zee behind forever.

I found Neptune's Tears was a really fast paced and fun book to read, there was a lot I liked about the world that the author has created and I was fascinated by the idea of empaths who are able to heal people with their powers. I enjoyed reading about a future where no major disaster has taken place and the world hasn't fallen apart around our ears, it meant the author was able to include lots of cool technology without having an apocalyptic feel to the story. That doesn't mean lives are easy though and there are a group of anarchists who seem determined to cause terror amongst the population and they have quite terrifying weapons at hand to do it with.

I found the main characters very easy to like, Zee is an admirable and brave young woman and I enjoyed learning about her abilities. She spends a lot of time with one patient in particular and I really liked the grandmotherly role that Ellie played in the story. Often YA books don't have positive adult role models so it made a nice change to see that here. David is more of a mystery and we don't find out much about him until close to the end of the book but I still liked him and I wanted to dig deep and learn all his secrets.

Although there were a lot of things I liked about the story I do think there was room for improvement. This is a very short book and I really felt it could have been so much better if certain points had been expanded on further. I really wanted some background information on how some humans had gained empathic abilities, where did these powers come from? Why are only some humans effected? I just needed a bit more depth to the world building to make the story more believable. The other main issue was with the romance between Zee and David. I actually quite liked them as a couple but because their romance is given very little page time and we only find out about most of the dates they go on because Zee discusses them with Ellie. Seeing everything second hand like that made their relationship feel like a major case of instalove when in reality events played out over a time period of several months. I really would have liked to spend more time with them as a couple so that I could have felt more connected with them and invested in their relationship.

In spite of those problems I did enjoy reading Neptune's Tears and I am looking forward to seeing what happens next. There was always something happening and I seemed to fly through the book incredibly quickly. There is also an interesting twist towards the end that I can't wait to see play out in the sequel Starlight's Edge.

Source: Received from Piccadilly Press in exchange for an honest review