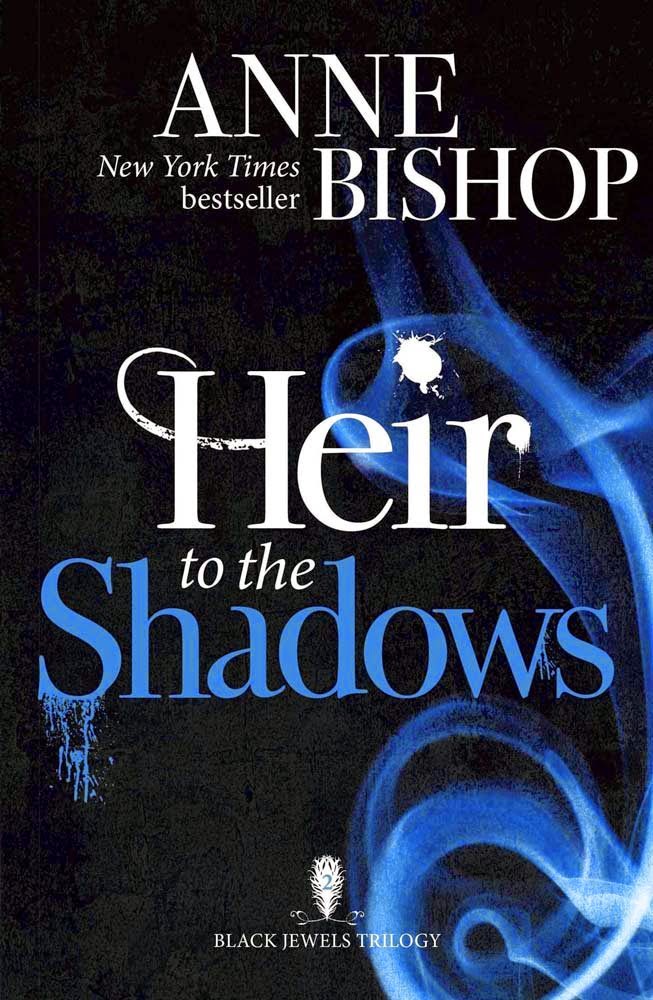 Witch - the woman who would bring freedom to the realms - has come, but now she is lost in darkness, and has a long road to recovery ahead of her.

While her adopted father Saetan waits for her to return to the living world, the third side of the triangle needed to complete the prophecy - the love, Daemon - walks in the Twisted Kingdom on the edge of madness.

As insidious whispers and dark schemes ferment treachery and betrayal, Jaenelle must make a choice: to protect those she loves, she must be more than an heir, she must become a Queen.

Review:
Daughter of the Blood may have been an incredibly dark and at times shocking story but I loved every minute of it so although I had to brace myself beforehand I couldn't wait to continue reading Jaenelle's story in Heir to the Shadows. I was expecting an intense read when I picked up this book and I wasn't wrong but I was also pleasantly surprised to find it isn't quite as dark and disturbing as the first book. Although this sequel wasn't quite as painful to read it does still contain scenes of mental and physical torture so I should probably warn anyone new to the series that you need to prepare yourself for the worst. I'm not trying to put anyone off because it's a FANTASTIC series but if you don't know what to expect you'll end up getting quite a shock! You also need to make sure you read this series in order, the world building is detailed and complex, there are a lot of different characters to keep track of and they have all had significant growth just in the first two books. You'll be completely lost if you pick up the books at this point and I would hate to see people to ruin the series for themselves.

As much as I enjoyed Daughter of the Blood I loved Heir to the Shadows even more, I can't tell you how grateful I am to already have my hands on the next book because as soon as I've finished writing this review I'm diving straight back into the world Anne Bishop has created! I just can't wait any longer to discover what happens to all of my favourite characters next. I don't think I have it in me to write a review that will fully explain what an amazing book Heir to the Shadows is or just how much I adore this series but I'm going to do my best in the hope of convincing you to read it for yourself.

At the end of the previous book we saw Jaenelle suffer the worst kind of physical and mental torture imaginable, it actually hurt my heart thinking about everything she went through and it's the kind of thing that no woman should ever have to deal with - let alone a 12 year old child. It was hard to see how Jaenelle would survive, let alone come out of the ordeal mentally stable but I had underestimated the amount of love and faith her friends and adopted family have and they pulled together to help her through. It takes 2 years for her mind to heal enough to return to her body but Saetan never loses faith in her. She has blocked the memory of the event that nearly killed her but she is still a very different girl to the Witch we met in the beginning. She is much more wary and finds it hard to fully trust even the people she was closest to before, she is also angry and has much less control over her temper. It takes a long time and the help of some very close friends before she starts to emerge as the fun loving and friendly girl she used to be but even then there will always be lasting effects from her trauma.

I absolutely loved meeting some of the friends that she'd spoken of in the previous book but that we hadn't been introduced to. We knew she visited lots of people besides Saetan, Daemon and Lucivar but now we get to meet her Kindred friends for ourselves along with the other young witches and warlords she has met over the years. Jaenelle draws both people and animals to her, they feel her power and know that she is the longed for Witch who has the ability to bring peace to the realms but that isn't the only reason they care for her. Jaenelle has no intention of setting up a court or taking over the duties of running a territory but she is still incredibly protective of the people she cares about and will use the power she was born with to keep them safe no matter what it costs her.

One of the characters who nearly broke my heart in the first book was Lucivar, every time we saw him he was either being tortured or being forced to watch someone else suffer and his POV made for some uncomfortable reading. I badly wanted to see him escape and find some happiness so I was absolutely thrilled with how things progressed for him in this book. He is finally reunited with his father Saetan and he is at Jaenelle's side like the protective older brother he's always wanted to be. Jaenelle needed men around her who had no interest in her sexually and I loved her interactions with both Lucivar and her adopted father Saetan. Their family dynamics are difficult at times because they all have reasons to distrust each other but there is such a sense of love between them and that really shines through in every conversation.

The one person missing from the family reunion is Daemon and although I understood his absence I'll admit I missed him because he doesn't play such a big role in this part of the story. Daemon is the one who saved Jaenelle's life but mentally throwing himself into the abyss to reach her cost him dearly and now he's paying the price. Daemon's memories of what happened to Jaenelle are vague and now he's not even sure if she's dead or alive. Worse still, he can't remember what caused her injuries and he is terrified that he did something to hurt her. His anguish over her possible death and the role he may have played in it have caused him to lose his mind and now he is walking in the Twisted Kingdom completely lost and alone. The only person who has the power to reach Daemon and bring him back is Jaenelle but when she blocked the memories of what happened to her she also blocked out the time she spent with Daemon. The most important question is will she remember who he is in time to save his life?

I've already said that this story isn't quite as dark as the first one but that doesn't mean things are all plain sailing and there are still plenty of enemies out out there making plots against Jaenelle and her family. I was glad we see some people start to get what they deserve but others like Hekatah and Dorothea are still plotting and getting ready to cause more trouble. In a lot ways the focus of this story is Jaenelle's recovery and seeing her build a network of close friends and allies that I think she will need on her side in the next book though. This instalment almost feels like the calm before the storm and I have a feeling things are going to go downhill fast for our favourite characters as the series continues in Queen of Darkness. I just hope Jaenelle and her allies are strong enough to face whatever is about to be thrown at them.