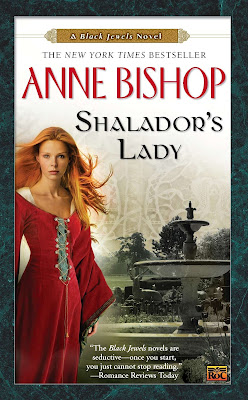 For years the Shalador people suffered the cruelties of the corrupt Queens who ruled them, punishing those who dared show defiance, and forcing many more into hiding. And even though the refugees have found sanctuary in Dena Nehele, they have never been able to call it home.

Now that Dena Nehele has been cleansed of tainted Blood, the Rose-Jeweled Queen, Lady Cassidy, knows that restoring the land will require all her heart and courage as she summons the untested power within her, a power capable of consuming her if she cannot control it.

And even if Lady Cassidy survives her trial by fire, other dangers await. For the Black Widows see visions within their tangled webs that something is coming that will change the land - and Lady Cassidy - forever...

Review:
Cassidy has worked hard to be accepted by the court in Dena Nehele and she has won over everyone apart from her first escort Theran. Unlike the others Theran is unable to see past the image of a queen he dreamed up before he even met Cassidy, he wanted someone more powerful and more beautiful than her, and because of that he is completely blind to all the good that Cassidy has done for him and his people since she arrived. Then the arrival of Cassidy's nemesis Kermilla threatens to destroy everything that Cassidy has started to build. Theran is immediately drawn to the younger, prettier queen not realising that she is just as poisonous as the corrupt queens that Dorothea forced them to serve in the past. Kermilla's arrival threatens to destroy Dena Nehele completely but will Theran be too blind to see the truth in time to save his people?

I loved the first book in this duology, Cassidy is a brilliant character and I really enjoyed seeing her settle into her new home and how hard she worked to show her court how life could be with a proper queen, one who wouldn't use and abuse them for her own pleasure. She actually cares about her people, not just those of the Blood but also the humans who live in their town and she wants to make life better for everyone. I also really loved Gray and was thrilled to see him growing into the man he always should have been in this book. After Kermilla's arrival most of Cassidy's court are extremely protective of her but Theran is so stubborn and stupid that I found him extremely frustrating to read about. If there was ever a character I wanted to shake some sense into it's Theran and I was disappointed that he took so long to realise his mistakes.

I hate to say it but Theran came close to ruining this book for me, if it hadn't been for the rest of the court moving away from him so that he didn't have such a huge page presence in the second half of the book I'd have struggled to keep reading. Cassidy and the others saved it though and I also loved the glimpses we get of old favourites like Jaenelle, Daemon, Lucivar and Saetan - I can NEVER get enough of those four! I was really pleased with how Cassidy and Gray's story ended so this book was definitely worth reading but it wasn't my favourite in the Black Jewels series.