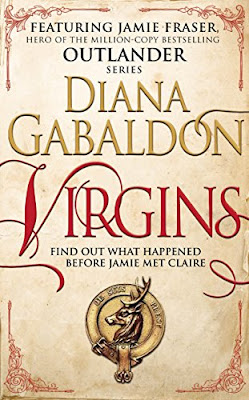 FIND OUT WHAT HAPPENED BEFORE JAMIE MET CLAIRE IN THIS BRILLIANT NEW OUTLANDER SHORT STORY.

1740: Young Jamie Fraser has left Scotland and, with his best friend Ian Murray, is running with a band of mercenaries in France.

Both men have good reason not to go back to their homeland: both are nursing wounds, and despite their best efforts to remedy the situation, both are still virgins.

So when a Jewish doctor hires them to escort his granddaughter to Paris, they readily agree. Both men are instantly drawn to the beautiful young lady.

What neither know is that their lives and their friendships are about to become infinitely more complicated - and a lot more dangerous ...

Outlander Series:
Virgins (Prequel Novella)
Outlander (Originally published in the UK as Cross Stitch)
Dragonfly in Amber
Voyager
Drums of Autumn
The Fiery Cross
A Breath of Snow and Ashes
An Echo in the Bone
Written in my Own Heart's Blood
Go Tell the Bees that I am Gone (Release date to be confirmed)

Review:
Virgins is only a short novella so I'm going to keep my review pretty short too. Set before Jamie and Claire meet this story sees Jamie travel to France to meet up with his best friend Ian. Jamie is recovering from serious injuries and can't return home for his own safety so he joins the mercenary band that Ian has been working alongside.

I don't really want to say much more than that so you'll just have to read the story for yourself if you're interested. I did really like the friendship between Jamie and Ian so it was nice to see how supportive the two are of each other but I wasn't particularly interested in the story and didn't really think it added much to the series as a whole.

I've only read the first book in the series but I'm already leery of the amount of attempted rapes (& actual rapes!) that have already occurred and friends have warned me it only gets worse as the series continues so I guess I shouldn't have been surprised that there was a rape scene and at least one attempted rape in a story that's less than 100 pages long. I get that rape would have been a huge threat to women back then (it still is now after all!) but I honestly think there is too much of it included in this series and I would enjoy the books so so much more if that was dialled back a bit. Oh well, I guess we'll just have to see how I get on with the second full length book, Dragonfly in Amber, which I'm hoping to read sometime soon.