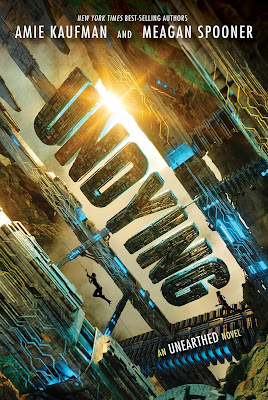 Earth's fate rests in their hands. Trapped aboard the Undying's ancient spaceship and reeling from the truth they've uncovered, Mia and Jules are desperate to warn their home about what's coming.

After a perilous escape in an alien craft, they crash-land on Earth's surface only to realise the awful truth: No one believes in the Undying threat in orbit.

With no choice but to take matters into their own hands, they must escape custody of the powerful International Alliance in order to discover the true mission of the Undying, and how to stop them. On the run, fugitives among their own people, they must journey across Europe to stop an alien invasion, prevent a horrific plague, and save the people they love.

From the mountains of Spain to the streets of Prague, the epic conclusion to the Unearthed series is a white-knuckle ride that will keep readers guessing until the final page.

Review:
Undying is the final book in the Unearthed duology and gives us a chance to find out what happened to Mia and Jules when they were onboard the alien spaceship headed back to earth. They're the only humans alive who know that the ship is a Trojan horse bringing an army of alien invaders with it but they've got no way of letting anyone know what is going on unless they can get off the ship and back on earth soil.

After escaping on a landing shuttle and picked up by the International Alliance you'd think it would be easy for them to explain what was happening and get some help with the situation. Unfortunately for them nobody is willing to listen to their explanation and the IA doesn't believe that the world is about to be invaded. If the IA won't listen Mia and Jules have no other option but to try and stop the Undying on their own but to do that they're going to need answers that only Jules' father has access to.

I really loved the Indiana Jones feel to the first book which was all about exploring an alien temple on a far distant planet solving puzzles along the way so I have to admit I was a little bit disappointed to be back on earth for the sequel! It made perfect sense though and it was fun to see Jules and Mia thrown into a completely different situation and have to figure out how to evade the authorities long enough to get the answers they needed. Their journey across Europe was fun to follow and we also get to meet some fun new characters in this one so I enjoyed having a larger cast for this story.

There were some shock revelations about the Undying at the end of the previous book that had left me with loads of questions about where they came from and what their plans were. Everything is slowly revealed in this book and there were definitely some twists that I didn't see coming. The story was very cleverly plotted and it was fun trying to unravel all the clues before the big reveal. This really was a great follow up to the first book and a satisfying conclusion to the series.