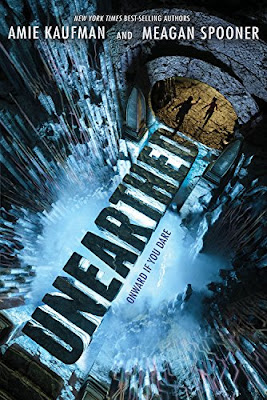 When Earth intercepts a message from a long-extinct alien race, it seems like the solution the planet has been waiting for. The Undying's advanced technology has the potential to undo environmental damage and turn lives around, and Gaia, their former home planet, is a treasure trove waiting to be uncovered.

For Jules Addison and his fellow scholars, the discovery of an alien culture offers unprecedented opportunity for study...as long as scavengers like Amelia Radcliffe don't loot everything first. Mia and Jules' different reasons for smuggling themselves onto Gaia put them immediately at odds, but after escaping a dangerous confrontation with other scavvers, they form a fragile alliance.

In order to penetrate the Undying temple and reach the tech and information hidden within, the two must decode the ancient race's secrets and survive their traps. But the more they learn about the Undying, the more their presence in the temple seems to be part of a grand design that could spell the end of the human race...

Review:
As soon as I saw that Unearthed was being pitched as "Indiana Jones meets Lara Croft set in Space" I knew I had to read it, especially since I loved the Starbound trilogy that was also co-authored by Amie Kaufman and Meagan Spooner. I have to say I think they were spot on with the Indiana Jones comparison and this was such a fun adventure story.

Set in a not too distant future where humans have wrung pretty much every last resource out of the Earth things aren't looking too great for our survival. Then scientists manage to intercept a message from an extinct alien race, the Undying, which gives us access to technology far beyond our own capabilities, including a way to travel to their distant planet. For scientists and scholars this opens up a unique opportunity to study an alien culture and bring home potentially world changing technology but only if they can get there before scavengers pick the planet clean for profit.

Jules is a scholar with something to prove, his father worked on translating the original alien message and Jules has studied his father's documents tirelessly. He's determined to reach Gaia and search for a missing temple his father told him about. Mia on the other hand is one of the scavengers and she desperately needs to recover enough alien tech to buy her passage on a ship home. The unlikely allies are thrown together after they're set upon by another group of scavvers, they both have very different goals for their time on planet but unless they find a way to work together they might both find they're stuck there permanently.

Unearthed is an action packed story full of booby traps and puzzles just waiting to be solved. Jules and Mia are pretty much opposites in every way but that works in their favour as they both bring different but equally important skills to the table. Jules is a geek who has studied everything about the Undying and who has memorised maps of the planet but it is Mia who has the street smarts and survival skills to get them where they need to be. I enjoyed seeing both of their points of view, they're great characters in their own ways and it was easy to understand their motivations even when you didn't always agree with the choices they had made. I'm not quite sold on the romance yet but it's been pretty slow build so far so there is definitely potential for the next book.

It was a lot of fun seeing them explore the temples and it was so easy to picture what was happening, I actually think this could be turned into a fabulous movie! There were some really unexpected revelations at the end and I'll warn you now that the ending is quite the cliffhanger but I'm totally on board for the sequel and can't wait to see how the story ends.