I love Alwyn Hamilton's Rebel of the Sands series, to be honest I thought I'd posted these trailers months ago but since I didn't, and since I'm currently writing my review of Hero at the Fall, I thought I might as well share them now. This is such a fun series full of adventure, magic and a girl who is a crackshot with a gun so if you haven't started it yet you're really missing out. 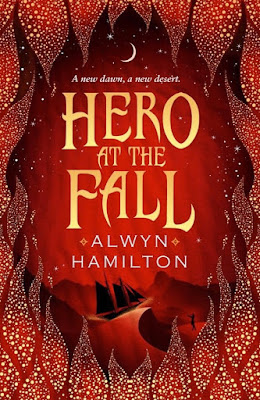 The rebellion has been betrayed. The Rebel Prince has been captured. And the remnants of the rebellion lie in hands more used to shooting a gun than managing an army: The Blue Eyed Bandit’s. Amani, to those who know her as the girl instead of the legend.


Just in case you haven't started the series yet here is the info for the first book Rebel of the Sands:

Sold immediately at auction across the world, this phenomenal novel is the first in a trilogy packed with shooting contests, train robberies, festivals under the stars, powerful Djinni magic and an electrifying love story. This promises to be a global super lead.

"Tell me that and we'll go. Right now. Save ourselves and leave this place to burn. Tell me that's how you want your story to go and we'll write it straight across the sand."

Dustwalk is Amani's home. The desert sand is in her bones. But she wants to escape. More than a want. A need.

Then a foreigner with no name turns up to save her life, and with him the chance to run. But to where? The desert plains are full of danger. Sand and blood are swirling, and the Sultan's enemies are on the rise.

and the second book Traitor to the Throne:

This is not about blood or love. This is about treason.

Nearly a year has passed since Amani and the rebels won their epic battle at Fahali. Amani has come into both her powers and her reputation as the Blue-Eyed Bandit, and the Rebel Prince's message has spread across the desert - and some might say out of control. But when a surprise encounter turns into a brutal kidnapping, Amani finds herself betrayed in the cruellest manner possible.

Stripped of her powers and her identity, and torn from the man she loves, Amani must return to her desert-girl's instinct for survival. For the Sultan's palace is a dangerous one, and the harem is a viper's nest of suspicion, fear and intrigue. Just the right place for a spy to thrive... But spying is a dangerous game, and when ghosts from Amani's past emerge to haunt her, she begins to wonder if she can trust her own treacherous heart.