So you've probably already seen this all over the internet but I'm so ridiculously excited for Leigh Bardugo's new duology in the Grishaverse that I just HAVE to share the cover for King of Scars even though it's not being published until January 2019 (and yes I do already have my copy preordered LOL).

So here's that cover in all it's golden glory: 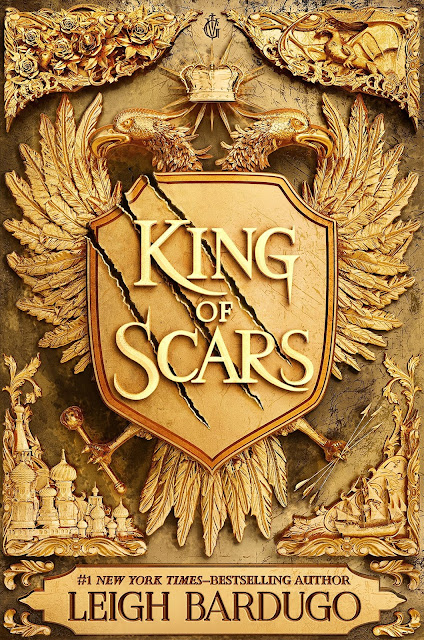 Isn't it BEAUTIFUL! Just in case you're not already sold here's the blurb:

Nikolai Lantsov has always had a gift for the impossible. No one knows what he endured in his country's bloody civil war - and he intends to keep it that way. Now, as enemies gather at his weakened borders, the young king must find a way to refill Ravka's coffers, forge new alliances, and stop a rising threat to the once-great Grisha Army.

Yet with every day a dark magic within him grows stronger, threatening to destroy all he has built. With the help of a young monk and a legendary Grisha Squaller, Nikolai will journey to the places in Ravka where the deepest magic survives to vanquish the terrible legacy inside him. He will risk everything to save his country and himself. But some secrets aren't meant to stay buried--and some wounds aren't meant to heal.

I know I already shared this trailer before but it's so fab I'm going to share it again for anyone who missed it the first time:

In case you hadn't already guessed I'm incredibly excited for this new duology and I can't wait to read it. I absolutely love the Grishaverse (even though I've still not forgiven Leigh Bardugo for things that happened at the end of Crooked Kingdom LOL) so this is sure to be a new favourite for me!
at 18:00