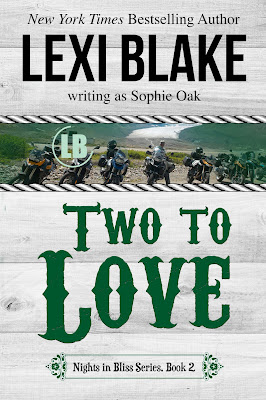 Growing up in the eclectic, small town of Bliss was wonderful for Callie Sheppard. She loved everything about it, except for the lack of potential romantic partners. She only went wild once in her life, sharing a perfect weekend in Dallas with two incredible men she never thought she would see again. When they parted, she was left with a hole in her heart she feared would never be filled.

DEA agents Nathan Wright and Zane Hollister were thrilled when Callie agreed to spend the weekend with them. Just days away from a long, undercover assignment, they considered this passionate affair to be an ideal way to spend their last days of freedom. They never expected to fall in love. Leaving her behind was the hardest decision of their lives.

Six years later, Callie is preparing to break in a new sheriff after Rye Harper walked out on the job. Her heart skips a few beats when the man walking through the door is none other than Nate Wright. Nate and Zane have come to Bliss, but their time undercover has left them broken and scarred. The boys are determined to win back Callie’s heart. But when the criminals they took down come seeking revenge, Nate and Zane may have to save the strange little town of Bliss before they can reclaim the woman they love.

Review:
Callie spent a wild weekend with Zane and Nate years ago and never really got over them leaving her behind with no way to contact them. She never expected to see them again so she's totally shocked when she finds out that Nate is the new Sheriff in her hometown, Bliss, especially since that makes him her boss and impossible to avoid. Nate now is very different to the fun loving guy she remembers though, he's more closed off and makes it quite clear that he has no interest in picking things up where they left off. Nate and Zane have spent the last six years working undercover with a dangerous gang for the DEA, things went sideways when Zane's cover was blown and he suffered the consequences both physically and emotionally. Nate is determined to help Zane heal but he has no idea how to get through to him, until Callie walks back into their lives that is. They both always regretted walking away from Callie but with so much history between them Nate isn't sure they can find a way back to each other.

First I have to start off by saying how much I love Bliss, the town is full of fun and slightly kooky characters but it's a place where everyone brings their own brand of weird so nobody is judged by anyone else. There's a nudist colony, a guy who believes aliens are out to get to him and they already have one out and proud threesome so they think nothing of Callie being interested in two guys. As much as I'm also enjoying the Texas Sirens series I really like the openness in this series and the way the town stand together when any member is in need. Callie grew up in Bliss and she can't imagine living anywhere else. It's obvious how much everyone loves her and that they rely on her but unfortunately for her there aren't that many romantic prospects so she's been alone for a long time.

Nate is struggling to deal with his guilt over the torture that Zane suffered while he went to get backup, he's also very career focused and can't wait to get out of Bliss and back to his real life in the city - he just needs to heal Zane up a bit first. Out of the two guys Nate was the hardest to get to know because he always had one foot out of the door looking for better opportunities but it becomes clear that he's just trying to live up to his father's high expectations and he does eventually realise that success doesn't equal happiness and isn't always the most important thing on offer. Zane was totally my favourite though, on the outside he's bigger and badder but inside he's an absolute sweetheart. From the minute he sees Callie again he sets out to show her how much he cares and how much he wants to be a part of her life from here onwards. Both Callie and Zane are willing to fight for what they need and neither of them will accept anything less than total commitment from Nate.

As I've come to expect from Lexi Blake the chemistry was fantastic but the story wasn't all sex, there were some really sweet and romantic moments, a little action and a lot of humorous moments too. I'm loving these rereleases and can't wait for the next book!