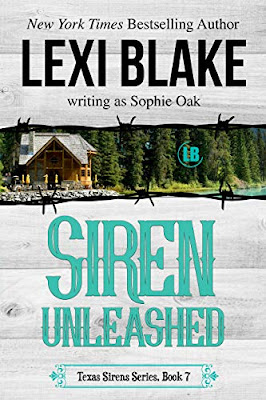 Detectives Ben and Chase Dawson have been sent to investigate an unusual murder at an exclusive resort owned by Julian Lodge. The prime suspect is a young woman who was the last person to see the victim alive. Julian wants them to ensure her safety while also conducting the investigation. The job seems simple enough, until Ben and Chase discover that the beautiful woman they have both come to desire has dark secrets.

Natalie Buchanan came to the Willow Fork Tranquility Spa seeking sanctuary after escaping the clutches of a twisted sadist. Working as a massage therapist at the resort has given her a chance to heal. It also offers her an opportunity to reconnect to the lifestyle she thought she would never be comfortable in again. But when one of her regular clients ends up dead on her table, Natalie fears that the monster she once escaped has come back to claim her.

As Natalie rediscovers her own power, all three will be forced to confront her past.

Review:
Ex Navy SEALs Chase and Ben are identical twins with such a close bond that they can literally feel each other's feelings and can pretty much read each other's minds. Now they're both working as private investigators and for their latest job they've been hired by Julian Lodge to investigate a murder at one of the resorts he owns. The prime suspect is a massage therapist who was the last person seen with the victim but Julian has very good reasons to believe in her innocence and he's tasked Chase and Ben with not only finding the real murderer but also with keeping her safe.

Natalie's parents have always been in a D/s relationship so she grew up in the lifestyle and she used to take great pleasure in submitting. She always expected to one day find her own permanent Dom and settle down but her life was almost destroyed when she was kidnapped by a sadist who tortured and abused her. She managed to escape her prison but mentally she's never recovered from the experience and it's turned something she used to take comfort in into something that she's now terrified of. When one of her clients is murdered it takes her straight back into that awful place but as events spiral out of her control she has to find the courage to face her darkest fears.

Although this story did have it's darker moments it's mainly focused on facing your fears and from Natalie's point of view it's about reclaiming your life back. Chase and Ben both had their own issues that complicate things at times but I absolutely loved the bond between them, the way they were always there for each other and that even when they disagreed with each other they were willing to work together to get what they wanted. These two probably come very close to being my favourite guys in the series and trust me that's really saying something because there have been so many characters I've fallen head over heels for! I also really liked Natalie, she had so much inner strength and I enjoyed seeing her overcome her fears and take what she wanted for once. I've said many times before that I'm totally hooked on these rereleases of Lexi's Texas Sirens and Nights in Bliss series, previously published under the pen name Sophie Oak, and that definitely continues to be the case. I can't wait for more books in this world!